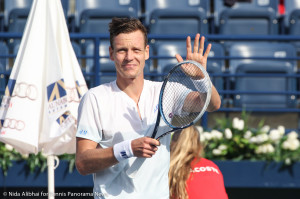 By Florian Heer
(February 25, 2014) DUBAI – The second day of the Dubai Duty Free Tennis Championships started on Centre Court with last year’s beaten finalist Tomas Berdych, who extended his seven-match winning streak against Romanian qualifier Marius Copil through a 6-3, 6-4 victory in 78 minutes. Since opening his season with a first round loss to Ivo Karlovic in Doha, the Czech has won thirteen out of his last fourteen matches with his only defeat coming to Stanislaw Wawrinka in the semi-finals of the Australian Open.
“It has been a tight match by the score but I think I had quite many chances even after I made my breaks each set and then in the last game I should have done something a bit different,” the Czech said after today’s victory. “You lose one point and then, you know, the guy serves really well. I got like four or five aces. That’s it. Then later I was able to serve it out,” Berdych added. It seems that the third-seed doesn’t want to peak too early and saves his best tennis until the end of the week. “Well, if I get there, I hope so, yes,” the Czech laughed. “Of course I’m trying to win every match. I have a space to improve for the further stages. I was especially looking more for my percentage of the first serve today, because always when you come up indoors to outdoors, really, this bright sky and straight sun to my face, it’s always very difficult with my high ball toss,” Berdych explained the difficulty coming from Rotterdam, where he collected his ninth ATP career title, to Dubai. 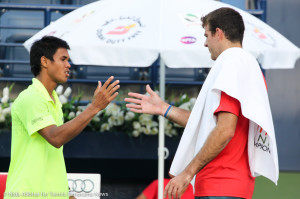 Next up was Wild Card Somdev Devvarman against Juan Martin Del Potro. The Indian played three ATP Challenger events on home soil over the last three weeks and lifted the trophy in New Delhi last week. Del Potro, who won the title at the beginning of the year in Sydney, is making his third consecutive visit to Dubai and so far he has always reached the semi-finals. This time, however, he will not have the chance to repeat his positive results.

After the Indian Wild Card had taken the opening set in the tie-break, the Argentine was forced to retire due to injury at his left wrist. “My wrist is hurting a lot, everybody knows what happened to me four years ago with my other wrist,” a clearly disappointed Del Potro stated afterwards. “It was really tough to play today and I tried everything but it’s really difficult to play in these conditions. I’m feeling similar pains to the other hand what I felt four years ago. It’s hurting all the time, it’s sometimes less and sometimes little more. But it’s hurting, and I have been in contact with my doctor all the time.  He’s trying to keep me motivated to keep playing, but I know what it’s my limit playing on court. Today was enough. I have been doing a big effort to play this tournament, and it was not enough to play what I like to play,” the Argentine said about his doctor, who fixed his right wrist in the past. The number two seed had been suffering with the injury before he arrived in Dubai, and he sought medical advice in the United States following his opening round loss at the Australian Open last month. “I will let everyone know very soon what my plans gonna be,” Del Potro said about the coming weeks.

Devvarman on the other hand was happy to advance but also had some thoughts for his opponent. “Obviously it is unfortunate, especially for a guy like him. I wish him nothing but the best and a good recovery,” the Indian said. “Regardless of whether his wrist was okay or not, I just tried to fight hard and tried my best to make things tough for him, make things easier for me. I’m just happy that I got through today,” Devvarman said about his own performance. 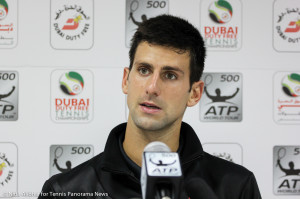 Defending champion Novak Djokovic, who returned to action for the first time since losing in five sets against Stan Wawrinka at the quarterfinals of the Australian Open, took on Denis Istomin for the fifth time. Djokovic, who has never lost before the quarterfinals in eight consecutive years in Dubai, only lost one set to the Uzbek before and today’s match shouldn’t change any of it. Djokovic gained an early break in the third game of the opening set and from then on the Serb remained in command eventually reaching the next round through a comfortable win in 64 minutes 6-3, 6-3. “It was a tough draw against Denis, who can play big from back of the court. He’s a tall guy, can serve well and loves playing on the big stages, so it wasn’t that easy as the scorelines indicates,” Djokovic said. “I needed to work for my games. Having not played an official match for more than four, five weeks, obviously takes its toll on the court. I do feel it a little bit. I practiced a lot, I put a lot of hours on the court, trying to develop my game, trying to get myself in the right shape and it is going to click sooner or later,” Dubai’s top-seed added and is going to face Roberto Bautista-Agut next. “He won against Del Potro in Melbourne in a thrilling five sets. He has improved his game significantly since last year and winning against Del Potro in a Grand Slam says enough about his quality,” Djokovic said about his next opponent. 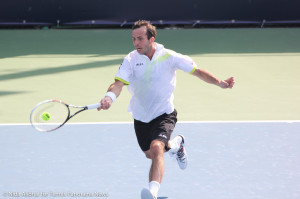 Two of the ATP Tour’s veterans Radek Stepanek and Michael Russell clashed on Court 3. The Czech and the US-American are two of the tree oldest players ranked inside the Top 110, so their first meeting was eleven years ago Stepanek winning in straight sets in Auckland. The 35-year-old Czech was able to repeat his victory today taking the match 5-7, 6-3, 6-1 after two hours and two minutes. Therewith he has extended the head to head record to 2-1.
A hard hitting duel took place on Court 2 when Lukas Rosol faced Daniel Brands. Both players have met six times before, mostly on Challenger level, leading the German 4-2. Nineteen aces were served today in total, one more for Brands but it was the world No. 49 winning eventually 7-6, 6-4 in 75 minutes.
World No. 177 James Ward, who was granted a Wild Card, upset Teymuraz Gabashvili winning 2-6, 6-4, 7-6. Ward made his maiden appearance at ATP 500 level and will face Mikhail Youzhny next, who defeated Michal Przysiezny in straight sets 6-3, 6-4. 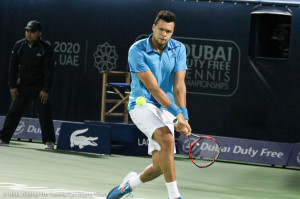 In Tuesday’s last encounter on Centre Court, Jo-Wilfried Tsonga faced Victor Hanescu for the second time. The last meeting between the two dated back to the year 2008 in Adelaide when the French won the match in three sets. Tsonga reached his first final of the season in Marseille on Sunday, where he lost to Ernests Gulbis who only arrived in Dubai this morning. Considering the quick change from indoors to outdoor, the Frenchman made an impressive start into the tournament taking the opening set in only half an hour. Tsonga went on to play a solid match cruising past the Romanian 6-2, 6-4 in only 72 minutes. “I played a good match tonight. I think I have an advantage on this surface, as it suits well to my serve and my forehand,” said the fifth-seed after the match.
Florian Heer travels the tennis tour with a focus on ATP Challenger events and the ITF Futures Circuit.  Follow his twitter account @Florian _Heer.
[portfolio_slideshow size=large]