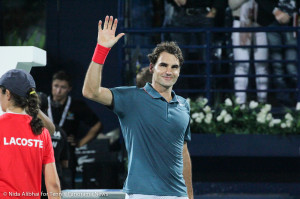 By Florian Heer
(February 28, 2014) DUBAI – Semi-final day at the Dubai Duty Free Tennis Championships saw the tournament’s two most successful players, Novak Djokovic and Roger Federer, go up against each other for a place in Saturday’s final.
The event’s theme “Stars will collide” became reality when both met for the 32nd time on the ATP World Tour with the Swiss leading their competitive head to head series by 16-15 before the match. The stands were fully packed when the players entered the stadium under floodlight, which created a special atmosphere. The match also started with some entertaining rallies, so that the crowd was in high spirits right from the beginning. Djokovic started with good length in his shots holding Federer back at the baseline. The defending champion capitalized on his first and only break point in the second game of the opening set to eventually take the frame in the ninth after 35 minutes.
In the second set, the Swiss again had to save break points in the fifth game before he was 30-0 up in the following when play was suspended for about five minutes due to drizzle in the desert at still about 20 degrees Celsius in the evening hours. So the match resumed quickly and Federer was wide awake and gained his first break of the match. Federer served out in the in the ninth game taking the match the distance. Djokovic struggled in his opening service game in the final set and double faulted at break point. The 17-time-Grand Slam champion was now able to play more aggressively, coming to the net as often as possible and so put a lot of pressure on the Serb. Federer broke a second time in the fifth game through great cross court forehand passing shot. The Swiss, obviously backed by the crowd, outplayed Djokovic at the end winning 6-3, 3-6 6-2 for the first time from a set down.

“Novak got the crucial first break, which is always big when top guys play each other and he is better than anybody with the lead,” Federer said afterwards. “So I knew I was a bit in trouble and it wasn’t looking good at all because he has the tendency to really then run with it and then play more freely on his serve. For me it was just a matter of trying to play consistently but also remain aggressive. Sometimes I also tried to be a bit overaggressive and to see if it works out. If it doesn’t’, you can always pull back a little bit. Overall I’m just happy I was able to deliver a good performance,” the Swiss added and was also impressed playing in such a great atmosphere. “I think the fans just wanted to see a great match. I do not know what they were chanting if it was, Nole, Nole or Roger, Roger,” he laughed. “Maybe there were more fans of myself in the stadium or more for Novak but I think it was a very enthusiastic and polite crowd and it was a dream playing out there today,” Federer said.
Djokovic had to admit the today’s defeat. “Roger deserved to win. He played in the second part of the match better and was more aggressive and played all around the court really well,” the Serb stated. “I dropped my opening service game in the third set, which was quite a bad game for me. I started making a lot of unforced errors as well and just wasn’t able to move well. He felt that this is the opportunity and he used it. The momentum changed and he stated to make less mistakes but look, I lost to Roger and that’s not a bad loss,” Djokovic said and has left for Indian Wells without winning a title in the season for the first time since 2006. 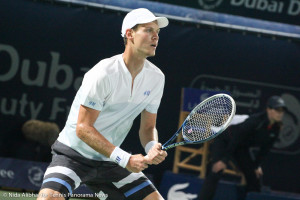 Earlier in the afternoon number third seed and last year’s finalist Tomas Berdych opened proceedings on Centre Court against Philipp Kohlschreiber. The Czech had emerged victorious in seven of their eight previous meetings, including the last three in a row.
Yesterday the German became the 23rd active player to reach the landmark of 300 match wins on the ATP World Tour by beating Tunisian Wild Card Malek Jaziri. Kohlschreiber made an impressive start into the encounter, returning well and capitalized on his first break point in the opening game. It was only the second time during this week Berdych lost his serve. The German seemed to remain solid with his baseline shots until the last four games, in which the 30 year-old still only made three points. Consequently, the third-seeded Czech broke serve in the twelfth game taking the opening set in 38 minutes. The second frame should become an even one as well as until the twelfth game again, in which Kohlschreiber couldn’t hold serve and after 88 minutes Berdych converted his second match point to advance into the final for the second successive year in Dubai.
“In the beginning of the match I probably forgot myself at the room and just came out right after. This was definitely not me,” the Czech stated about his bad start into the match. “Then I was ready and I took the first set. Basically the similar stuff happened in the second set. Philipp was very solid, didn’t give me much chances at all on his serve. Then I got one in the last game and I took it,” Berdych was happy with his performance. 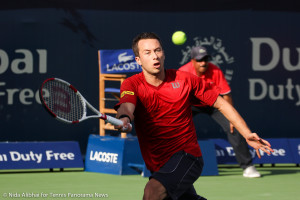 Kohlschreiber, who actually played a fine match apart from the end of each set was still satisfied with his week in Dubai. “Overall it was a very great tournament. Today was also great to play in front of such a nice crowd. Nonetheless it takes for sure a couple of maybe minutes, hours to get over the loss,” Kohlschreiber said right after the match. “Today, the only chance I had for a break was at the beginning of the match but then over the time he put more pressure on me and I didn’t serve so well. I had to go over many second services and this makes it always tight against these top guys,” the German explained.
In Saturday’s final Federer is facing Berdych for the 18th time leading 11-6 in head to head record but the Swiss had to admit that the Czech beat him last year here in Dubai in a very convincing way.
In the doubles final the two top-seeded-pairs will meet for the title. Daniel Nestor and Nenad Zimonjic defeated Danield Brands and Florian Mayer in two tie-breaks and Rohan Bopanna and Aisam-Ul-Haq Qureshi advanced by winning 6-2, 6-0 against Tomasz Bednarek and Lukas Dlouhy.
Florian Heer travels the tennis tour with a focus on ATP Challenger events and the ITF Futures Circuit.  Follow his twitter account @Florian _Heer.
[portfolio_slideshow size=large]