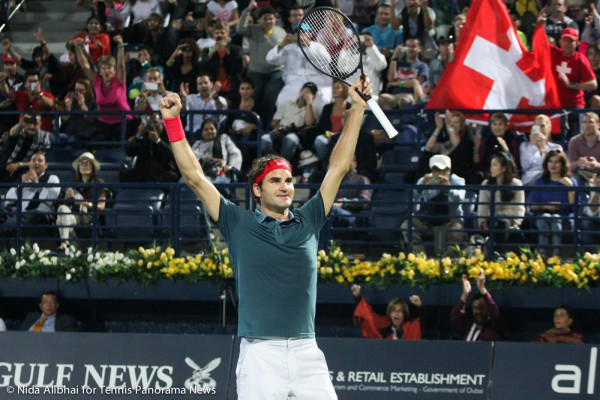 By Florian Heer
(March 1, 2014) DUBAI – Roger Federer won his sixth crown in the desert at the Duty Free Tennis Championships beating last year’s finalist Tomas Berdych 3-6, 6-4, 6-3, coming back from being down a set and a break. The Swiss led their head-to-head series 11-6 before the match but it was the Czech, who emerged victorious the last two times the pair met at the US Open in 2012 as well as here in Dubai last year.

In front of fully packed stands, it was Federer, who gained first blood by taking the opportunity and broke a shaky third service game from the Czech. Berdych recovered quickly and broke back to even score at 2-2 when the 32-year-old former world No. 1 started to produce a couple of unforced errors with his forehand. In the following the third-seed remained aggressive, in particular on Federer’s second serve, of which the Swiss could only win 30% percent of the points. Consequently Berdych gained another break in the sixth game.

The Czech served out taking a not very exciting first set in 33 minutes. Berdych also made the stronger start into the second set getting a break in the fifth game. Federer, who was clearly favored and backed by the crowd was able to find the right answer by gaining the immediate break back. The Swiss now playing with an aggressive style, came to the net more often, snatched the momentum and gained another break on set point in the tenth game to take the match the distance.
In the final set, Berdych’s first serve and forehand seemed to desert him. The Czech lost his service in the fourth game and Federer confirmed impressively in the following through a nice drop shot. The Swiss eventually served out the match after one hour and 58 minutes beating Berdych 3-6, 6-4, 6-3 for the first time since Madrid Masters in 2012. Federer ended the Czech’s eleven matches winning streak by lifting his sixth Dubai crown as well as his 78th career title but will remain the world’s No. 8 in the ATP Rankings.
“It’s like one of the things you just kind of hope it turns for the better,” Federer said afterwards about coming back from a set and a break down. “At that point you’re just telling yourself to serve well to give you maybe a few good opening points on Tomas’ serve. If he serves well, it’s difficult or the margins are extremely slim at that point. So once you do get back, it’s important not to relax then and think that the hardest part is done. It’s only about to beginning actually,” the Swiss explained.
“So I was happy I was able to use the momentum, win the second set and then it was a tough third one wasting the 0-40 game on Tomas’ first service game. Then I even had to save breakpoints by myself. I mean, anything could have happened there but things definitely went my way tonight,” the champion was happy. “It was a switch I wanted to do for a long time,” Federer said about the role of his new racket. “I like the chances Wilson was able to come up with. I’m happy that the results are paying off, especially in quick succession. I have only just switched and I made it into the final in Brisbane, the semis at the Australian Open, won my Davis Cup match and now I’m here with my trophy,” he added. Federer himself, however, is not sure if he can be dominating world tennis again. “Who knows? I’m just happy that I’m healthy again and that I can focus on tactics and not focus on me,” the Swiss concluded.
“Many things went wrong today,” said a disappointed Berdych afterwards. “The match was starting pretty well. I had really many chances, and then I basically just gave him the game and that’s it. I’m disappointed how I handled the situation. I was in better shape, played really well and made my chances. Unfortunately I didn’t execute until the end,” the Czech stated.
The Swiss has won at least one ATP World Tour title every year since 2000 and Saturday’s victory saw him pass the $80m mark in career earnings. Federer now has a 42-5 event record in Dubai, previously lifting the trophy in 2003-05, 2007 and 2012. 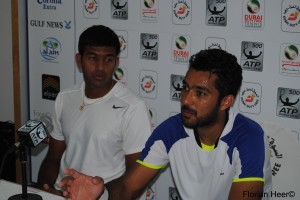 Earlier in the afternoon, the tournament’s two top-seeded-pairs faced each other when the combination of Daniel Nestor and Nenad Zimonjic took on Rohan Bopanna and Aisam-Ul-Haq Qureshi. It was only the Serb losing his service game during the match. In the opening set Zimonjic was broken in the tenth game and in the second frame it happened in the fourth game. Qureshi finally served for the title winning 6-4, 6-3 in 68 minutes. The “IndoPak Express” took their first title as a team since the ATP Masters 1000 in Paris in 2011. It was theit fifth ATP World Tour team title and first since reuniting at the start of 2014.
“We started off well this season playing a good final in Sydney but lost it to Nestor and Zimonjic. I’m happy to get a little sweet revenge back,” Bopanna said afterwards.
“Today we took our chance, which was key I think. On the big points, especially the no add points, Rohan returned remarkably well. I also think that we served really well and smartly,” Qureshi added. “Even though we have a different style of play, we both play really aggressively. In a way it does complement each other and also the fact that we always keep us motivated even after hitting bad shots. It’s just working as a team,” Bopanna told about their good partnership. “We also have Scott Davidoff traveling with us now. He’s been on the tour for many year and has a lot of experience. I think he’s brought in so much more to our game as well,” the Indian added.
Florian Heer travels the tennis tour with a focus on ATP Challenger events and the ITF Futures Circuit.  Follow his twitter account @Florian _Heer.
[portfolio_slideshow size=large]
See all of the photos from the past two weeks of Dubai tennis coverage on the Tennis Panorama Facebook page: http://on.fb.me/OOUwHw