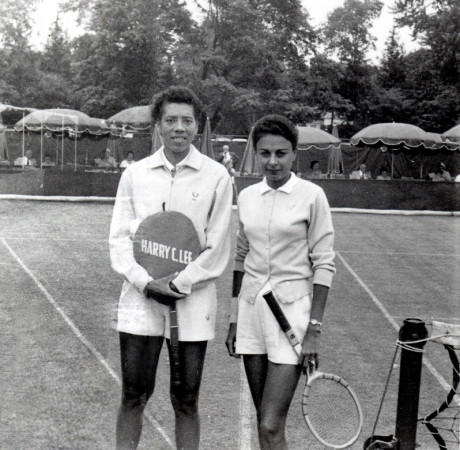 March 2014 – “ALTHEA”, a feature documentary about tennis great Althea Gibson is set to make its debut this spring being selected for a few major film festivals to be announced. Filmmaker Rex Miller began searching for Althea Gibson’s story because of a photograph that hung on the wall of his childhood bedroom. Taken in 1958, it shows two brown-skinned women, dressed in their tennis whites, holding tennis rackets and standing on the front lawn of the Merion Cricket Club, a prestigious and highly restricted tennis club outside of Philadelphia. One woman was his Jamaican-born mother, Millicent Miller. The other was Althea Gibson.
“I was told that story from a very young age, the story of my mom’s big (and fleeting) moment of glory, a chance to play the Wimbledon Champion Althea Gibson,” Miller said. “Over the years I came to realize that most people–even in tennis–have little idea of who she was and all she accomplished. Not only did she succeed in Tennis, but in Golf and music as well. Fifty years after she broke the color barrier, I think it is time for a fitting recognition of the legacy of this great champion and trailblazer.”
This project has been a labor of love for Miller – and this labor has taken over five years. Miller was inspired to do this documentary, not just from seeing the photo of her mother with Gibson, but also because after doing some initial research on Gibson he said that even in the tennis community, not many people knew much about her.
“Everyone knows who Arthur Ashe is,” Miller explained, “but pretty much not many people knew anything about Althea. And she was on the scene before 15 years before Arthur, and that’s how I got intrigued.”
“People don’t know the scope of who she was. She was literally born in the cotton fields, her parents were sharecroppers and she went on to receive the Wimbledon trophy from Queen Elizabeth.
“For me her story links to the greater African-American story in this country.”
Although the documentary is completed, the project is still raising funds to cover the costs to pay for archival footage – photographs, old film footage, news footage, etc.
They have launched an indigogo campaign with a goal of raising a minimum of $30,000 in the next three weeks.
Here is the link:
http://www.indiegogo.com/projects/althea
The donation to the project is tax-deductible via the Southern Documentary Fund (less the value of the perk associated with each tier of giving).


“ALTHEA”, a feature documentary, 88 mins, 2014.
Rex Miller, Director/DP
Althea Gibson, a truant from the rough streets of Harlem, emerged as a most unlikely queen of the highly segregated tennis world of the 1950’s, becoming a two-time winner of both Wimbledon and Forest Hills (now the US Open), the first African-American to win those prestigious events, a decade before the great Arthur Ashe. Althea’s life and achievements transcend Sports. Her roots as a sharecropper’s daughter, her family’s migration north to Harlem in the 30’s, her mentoring from Sugar Ray Robinson,  David Dinkins and others, her fame that thrust her unwillingly into the glare of the early Civil Rights movement, all bring the story into a much broader realm of African-American History.
Rex Miller – Producer, Director and DP
Elisabeth Haviland James – Producer, Editor