(March 5, 2014) INDIAN WELLS, California – The top eight women’s seeds held court on Wednesday taking questions from the media during roundtable interviews at the BNP Paribas Open. Here are a few notes and quotes from session: 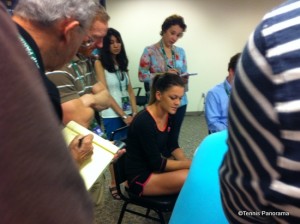 Agnieszka Radwanska and the Cheesecake Factory
Radwanska professed her love for the Cheesecake Factory. She has inked a multi-year agreement with her favorite restaurant. She’ll be sporting the logo on her visor when she plays.
Radwanska says that she can complain about her season so far – two semifinals including the Australian Open.
Last year Radwanska became a blonde and is back to being a brunette. When asked about the change back to her natural hair color, she said “I prefer the dark hair. It was good to change sometimes.” 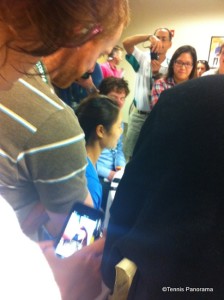 Li Na is the No. 1 Seed
With Serena Williams absent from Indian Wells, Li Na holds the mantle as the No. 1 seed for the tournament. “Feel pretty good,” Li Na said about having the top spot. This is the first time that she’s been the top seed at WTA Premier Mandatory event.
So what’s life after winner her second major like? She says not much different. “I signed a lot of autographs. But not contracts, OK? So looking forward to signing a lot of contracts,” she said. 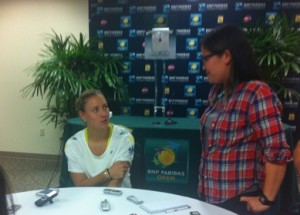 Angelique Kerber – Germany’s Fed Cup team members get a Porsche
So what does she think makes her game special? She says she has the ability to read her opponent’s game, and her defense – how she runs and fights for every point. “That’s what I have inside,” she said. As to what she thinks she needs to improve, she says that she needs to play more “aggressive” tennis.
Kerber spot fondly of being a member of Germany’s Fed Cup. She says they are all friends so everyone wants to play and there is a nice incentive – each Fed Cup team member gets a Porsche. Porsche is the sponsor of the Fed Cup team in Germany. 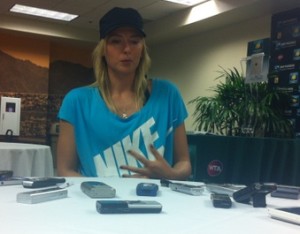 Maria Sharapova NBC Correspondent
“Carrying the torch was the biggest honor I could have received,” said  former Sochi native Sharapova in choosing between carrying the Olympic torch or Russia’s flag at the Olympic games.
In addition to her torch carrying duty, Sharapova was a correspondent for NBC during the Sochi games. “It was really fun,” said the Russian.
Asked if she would be interested in media in the future she said, ” I am not sure. I had a great time and I don’t know if that’s something I would do for long periods of time. I love that challenge of it.
“We shot for so many hours for a three minute clip.” She emphasized how it takes a lot of time to put a short piece together in television between shooting and travel time.
Her Sochi experience was a great one, but she’s happy to get back to the court. 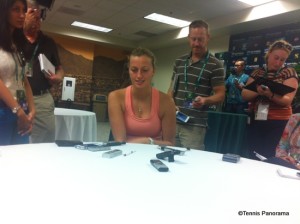 Petra Kvitova
When asked about whether she feels that most of the time her matches are on her racquet, she responded, When I’m playing, I’m feeling it’s about me and I’m playing aggressive myself, that’s most(ly) about me.” Not all of the time is a happy end.” Kvitova admits that she’s OK with her game but she has some  more expectations of herself.
Playing aggressively comes natural to the 2011 Wimbledon champion. 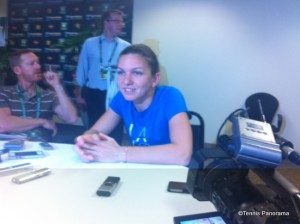 Simona Halep is a first-timer at the WTA All-Access
Simona Halep’s ranking has been on the rise for the past few years. Last year only No. 1 Serena Williams claimed more titles than the Romanian during the year.
To what does Halep attribute that success to? “I was more aggressive starting  with last year in Rome, becasue I played really well there. Before I had (a) back injury and it was very hard and I couldn’t play at my level but after that I did really well.”
” I am very happy to be top ten . It’s amazing. Now I can see that I can play the highest level in tennis so I want to continue to be focused.”
She admits that she enjoys the perks of being in the top ten. “I have the bigger car,” she said. As a top ten player it entitles her to a bigger car at tournaments. She enjoys driving and one of the reasons she loves this tournament is that she can drive.
She recently purchased a Range Rover back home in Romania.
Halep’s biggest triumph came in Doha last month, where she beat three top ten players for the title. ” After Australia I thought I could be at highest level of tennis, now I am really happy that I can play in top ten.” 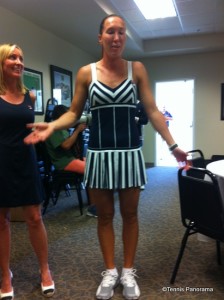 Jelena Jankovic models new French Open Fila dress
Jelena Jankovic walked into her roundtable session modeling her new Fila outfit for the French Open accompanied by the designer Ginny Hilfiger.
Jankovic reacted to her former coach Nick Bollettieri being named for induction into the International Tennis Hall of Fame. “Nick is an amazing person,” Jankovic said. “He’s the one who helped me quite a  lot, you know when it comes to my game brought me a lot at young age.”
“He helped me to believe in myself,” said the former No. 1.

Victoria Azarenka is coming back from a foot injury
By viewing her practices on Monday, one could tell that No. 4 Victoria Azarenka was in some type of pain. She told media that her foot injury had her in a walking boot for three weeks last month. She confessed that she’s only been able to practice for less than a week.
“When you hear for the first time from the doctor that you have to wear a boot for three weeks and the tournament is four-and-a-half weeks away you’re like ‘OK, let’s see how it goes,’” she said. “I just wanted to stay positive and do the best job as possible.”