You are here: Home / Features / Taylor Townsend Striving for Top 50 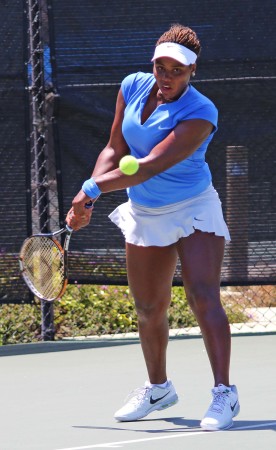 (March 6, 2014) INDIAN WELLS, California – Just a year ago a 16-year-old Taylor Townsend made her pro debut at the BNP Paribas Open knocking off top 100 player Lucie Hradecka. A year later the young American, another wildcard and a year wiser, Townsend tops No. 49 Karin Knapp 7-6(1), 6-1, Back in January Knapp extended Maria Sharapova to the brink at the Australian Open.
The match was not a clean one, both combatants combined for 53 unforced errors. “ Neither of us had a rythym on serve,” Townsend said in regard to the back and forth first set. I was just trying to stay solid on my returns, just trying to make her play every single ball.
The former Junior No. 1 said the biggest improvement has been her focus.
“I’m happy with my progress, as far as where I’ve been going, what I’ve been doing. I’ve been doing a lot of hard work, a lot of hours, both on and off the court.
“I’m happy with my progress over the last couple of months.”
“My mental game has gotten a lot better. My coaches and I have been stressing being very mentally tough and learning the game, learning how things work,” Townsend said. “We’ve been stressing that a lot, watching a lot of matches and trying to understand how to play when pressure hits, how to play when you’re up, how to play when you’re down. Things like that.”
Townsend’s focus was tested, just before her news conference when she followed her favorite player Roger Federer into the interview room – as he was leaving, she was entering.
“I tried not to look,” she said with a laugh. “Focus, Taylor focus! That’s what I’ve been working on. Focus please. I played it off well.”
Townsend’s goals for 2014 are to make the top 50 in singles and in doubles. “I’m pretty far away in singles (No. 337), in doubles I’m 189 so that’s not hard. You can have a few good tournaments, here and there and that can shoot up easily. Off the court I’m just continuing to work on myself.
A big test comes for Townsend in the second round when she plays the Italian veteran Flavia Pennetta, the 20th seed at the BNP Paribas Open.