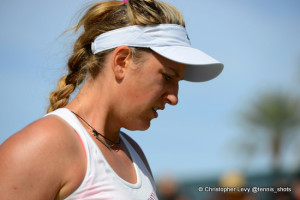 (March 7, 2014) INDIAN WELLS, California –
Nursing a left foot injury, third-seeded Victoria Azarenka fell out of the BNP Paribas Open on Friday night in her first match in more than a month. American Lauren Davis winning 6-0, 7-6 (2).
Azarenka had been off the tour since the Australian Open due to some never damage between her toes. She had to wear a boot on her foot for three weeks.
“Basically, all I had was my fighting spirit,” Azarenka said. “When I’m on the court I try to give as much as I can, even on one leg. I try to do my best in tough situations. That’s part of our job.”
Azarenka is uncertain if she’ll participate in the Sony Open in Miami in 10 days.
“I want to be pain-free because it’s not to the most fun to be out there like that,” Azarenka said.
“It means so much to me,” Davis said.  “My first top 10 win, and just being in the third round of Indian Wells really boosts my confidence.
“I just tried to focus on myself, and, I mean, at times blocked them (the crowd) out.  Because like when you’re up and you’re about to beat the No. 3 girl in the world is kind of a high and you kind of look towards the end of the match.
“So I just really just tried to focus on myself and just block them out.”
The only other seed to fall on Friday was former two-time champion Hantuchova, seeded 29th, losing to American Varvara Lepchenko, 6-3, 6-2.
Other seed to advance included second seed Agnieszka Radwanska, No. 6 Simona Halep, No. 7 Jelena Jankovic, No. 9 Sara Errani and No. 10 Caroline Wozniacki.
On a packed Stadium court 2, 2008 Olympic Doubles Gold medalists Roger Federer and Stanislas Wawrinka paired up for a 6-2, 6-7 (4), (10-6) win over Rohan Bopanna of India and Aisam-ul-Haq Qureshi of Pakistan.
“I don’t know if it was sold out, but it felt like very, very full,” said Federer. “You’re not probably going to achieve that on center court (which holds 16,100) for a doubles. But that was a perfect setup, a feeling, and we can thank the tournament and (owner) Larry Ellison for building such a court so quickly.”
“It’s nice to see the game grow and seeing people coming out and enjoying it. It’s great. I really had a great time out there with Stan today.”
“It took me time to realize really what I did in Australian Open,” said current champion and No. 3 seed Wawrinka.
“Still when I’m saying that I won a Grand Slam it’s still strange for me, but that’s why it was good to be home during three weeks. It was good to be with the family, to take more time for myself.