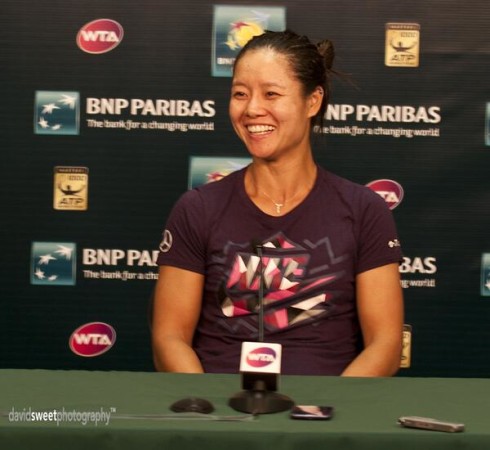 (March 8, 2014) INDIAN WELLS, California – No. 1 seed Li Na beat Chinese countrywoman Zheng Jie 6-1, 7-5, while fourth seed Maria Sharapova began the defense of her title with an easy 6-1, 6-4 victory over Julia Goerges.
Two seeded German women fell – No. 5 seed Angelique Kerber was upset 2-6, 7-6 (5), 6-4 by Maria-Teresa Torro-Flor while Aleksandra Wozniack stopped No. 15 seed Sabine Lisicki 7-5, 1-6, 7-6 (5).
Former No. 1 Ana Ivanovic was a set and a break down before stopping Elina Svitolina.
“I just tried to fight her at every point,” Ivanovic said of the turnaround in the second set. It probably wasn’t the best game I had played. I had lot of unforced errors I tried to stick with it and play each point and not try to think about the errors that I made and just to put pressure on her forehand and that worked well for me. I was very happy to manage to come back.”
In the night session, Sloane Stephens ran off the last nine games in a 6-4, 6-0 win over Ajla Tomljanovic. Advancing easily were No. 8 seed Petra Kvitova, No. 11 Ana Ivanovic and No. 12 Dominika Cibulkova.
For Li Na, this is her second tournament since winning the Australian Open.
“This is the first match after Doha, two weeks, and of course for I cannot be 100 percent for the first match,” Li said. “But I was happy. At least I can learn something from today’s match.”
This also marks the first time that Li has been the top seed in a premier mandatory event.
“The first match always tough, because like I say before, you didn’t know what happen on the court,” Li said.  “All you can do is like to try to do your best.  If you cannot hit good tennis, only one way is running all the shots and to fight every point.”
“First time to be the top seed in a big tournament.  Yeah, at least I’m still in the tournament,” she said smiling.
Li will play Karolina Pliskova next in the third round, who took out No. 28 seed Klara Zakopalova 7-5, 6-2,
“The first matches are always a little bit tricky, especially having not played in a few weeks indoor or outdoor,” Sharapova said.
“Tricky opponent, and she’s capable of playing good tennis.  She hasn’t been as consistent as she probably would have liked recently, but she’s had her results.  She’s beaten top players before, so the first round, that’s never easy, but I thought I did what I had to do.  Certainly improvements that I could make.”