You are here: Home / Front Page News / Nadal and Murray Tested as Federer and Wawrinka Also advance at the BNP Paribas Open 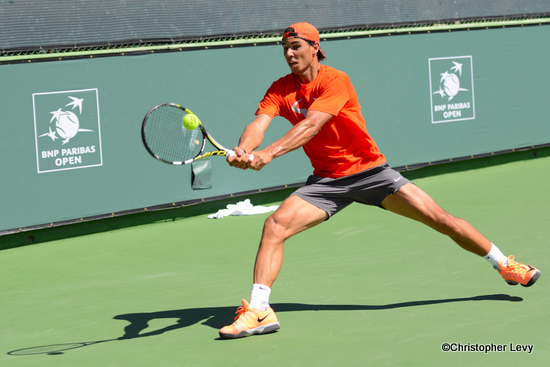 (March 8, 2014) Rafael Nadal, Andy Murray, Roger Federer, and Stanislas Wawrinka all advanced to the third round of the BNP Paribas Open on Saturday.
Both Murray and Nadal were forced to rally for their victories. No. 1 Rafael Nadal was extended by Radek Stepanek 2-6, 6-4, 7-5 on Stadium 1 to lead off the night session.
“Happy to be through, because the start of the match, even if I felt at the beginning I didn’t play that bad, was very quick 4 1, and I felt I was not playing that bad, no?,” Nadal said.
“He is not the right player to play against in the first round. He’s not the right player because what you want to find in the first round is rhythm and against him every point is different. He goes quick to the net. They don’t give you that few games to find your rhythm, to find a way that you want to play.”
Nadal, who injured his back during the Australian Open final spoke about his concern for the past injury and how his serve was affected during the match. “With my serve I was doing nothing. When that happens, the opponent is able to play more aggressive, play more confident and in the end, eight double faults, I give him an opportunity to win a lot of free points,” Nadal said.
“You know, a little bit scared for the back, Nadal continued. “I am not feeling yet 100% confident with my serve. Even if my back is better than Rio in Rio I was feeling the back not very well.
“I am feeling the back better, but probably that match gonna help me to understand that I really can start to serve normal again, because I was serving with limitations, with, you know, no confidence, because I was scared to feel again the back, no?
“I think I can try to serve again at 100%, because I am feeling better. That match show me that I can try.”
Playing for the first time since the Australian Open Murray came back to beat Lukas Rosol 4-6, 6-3, 6-2.
“Here I have always kind of struggled at the beginning of the tournament with, you know, I don’t know if it’s the conditions or, you know, whatever reason it is, but I have never really started this tournament that well,” Murray said.
“I have always struggled, especially in the first round. So, yeah, just have to try to find a way to get through.”
“I was a set and a break down,” Murray said. “I got broken three times in a row the end of the first set, beginning of the second. I just kind of kept going and found a way to win, which is always the most important thing.”
Seventh seed Federer defeated French qualifier Pail-Henri Mathieu 6-2, 7-6(5).
After his win over Ivo Karlovic, Wawrinka spoke about where he keeps his Australian Open trophy.
“The trophy is in Switzerland in a safe place,” Wawrinka said.