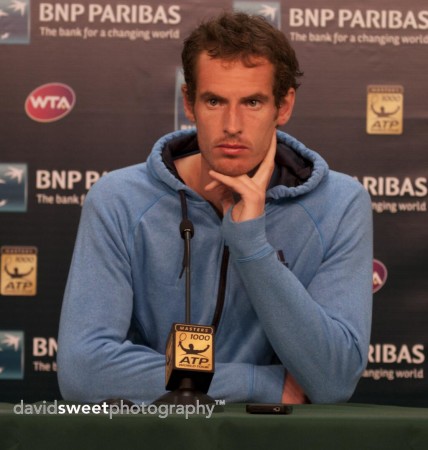 (March 10, 2014) INDIAN WELLS – In an error-strewn match, Andy Murray survived No. 77 ranked Jiri Vesely 6-7 (2), 6-4, 6-4 on Monday at the BNP Paribas Open.
“Well, the match was a frustrating match.” Said Scot.  “Whether it was the beginning or the end, it was that sort of match where at no stage did either of us play well at the same time.
“You know, I started the match well; he started off the match badly.  He missed a lot of easy shots, and then he started playing consistent, not making errors, and I started missing.
“And, yeah, it was just one of those matches where there wasn’t one period where I thought that, you know, the level of tennis from both of us was high at the same time.
“That can create a lot of breaks and a lot of sort of back and forth swings in the match.
“Yeah.  It wasn’t just the start of the match that was frustrating.  The whole match was.
Playing the 20-year-old Czech for the first time, the fifth seed had 47 of the total 99 errors in the 2 hours and 47 minute match. He was forced to rebound from a break down in each of the last two sets. Both men combined for 32 break points and 14 breaks of serve.
For Vesely who is the youngest in the top 100 of the ATP Tour, he was playing in his first Masters 1000 event. 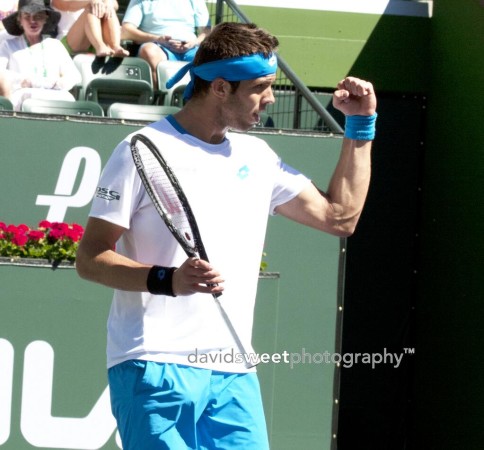 “I would like to make the game balls that I had in the second and also in the third set, but I was a break up and I was in the second set leading 40‑15 on my serve and the third set I had advantage.
“Maybe if I would use one of these chances maybe I would finish the match.  But, you know, Andy is just a big fighter and he’s guy top 10 which deserves to win.
“So, yeah, just need to take all the positive things from the match and try to keep working hard on myself.
“I was really struggling with myself,” Vesely continued.  “I mean, after I won the first set, which was really exciting for me, and getting the early break in the second set, I just felt really chance to beat this guy until 4‑2 in both sets, second and third, I was playing good without any mistakes.
“But then I always got a little bit tight, and I just felt the chance that I really can beat him.  I think that was maybe the one thing that was painful then in the end.”
“The most important thing today was that I won,” Murray said.  Yeah, I wasn’t happy with the way that I played.
“And, yeah, that’s ‑‑ I mean, it’s kind of days like that where, you know, I could have lost the match and you don’t get an opportunity until Miami to play better or to improve some things.
“Yeah, it’s good to have the chance to play another match here and hopefully put in a better performance.
“It was a very hard match, said Vesely.  “I feel right now physically very tired.  Of course it hurts.”
Murray moves on to play Milos Raonic for a place in the quarterfinals.