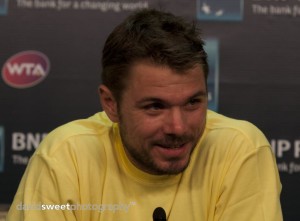 (March 10, 2014) INDIAN WELLS – Australian Open Men’s champion Stanislas Wawrinka dominated Andreas Seppi 6-0, 6-2 in the third round of the BNP Paribas Open on Monday.
“Today was amazing match,” said the world No. 3.  “Can’t complain.  “Playing that great, it’s good.  That level, depends a little bit who you play, but I’m really, really happy with my match today.
“I’m moving really well, and every time I can play aggressive it makes a difference.”
Asked if he plays to reach No. 1, the top Swiss player said:
“No.  I’m too far away from No. 1.  I’m really far.  Look at the ranking.  Look at Rafa and Novak are there since many years.  They are winning minimum two Grand Slam a year, making final, semifinal, winning Masters 1000.
“But I know my level.  I know that I can play great tennis this year.  I never won a 500.  Never won a 1000 tournament.
“We’ll see.  I’m not thinking at all to be No. 1.  I’m just trying to improve, trying to win every match.  We will see.  I’m not expecting to win a Grand Slam but I did it, so anything can happen.” 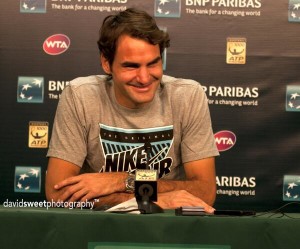 Swiss No. 2 Roger Federer needed to win a pair of tiebreaks to stop Dmitri Tusunov, closing the match out with an ace.
Federer said that he’s having a better year this year.
“I feel different this year,” Federer said. “Now I feel like I’m in a good place. Zen on the court. Even if I won 6 and 6 today, I just feel like I was calm. Those are the moments where you feel there is confidence around somewhere.”
Federer changed to a new racquet with a bigger head this year and the 17-time major champion updated the press corps o how he feels about it.
“It’s good.  I’m very happy.  I mean, I’m not really thinking of it, so that’s a major step in the right direction.  That’s the best you can ask for when you change racquets.
“Then you hope that success follows.  That’s happened, too.  That’s why basically ‑‑ I had a meeting with Wilson this week looking to see if there is any small changes coming up or if that’s how I’m going to keep it right now.
“So we’re just looking to see what’s going to happen the next sort of month or so.  I’m really happy about how it’s playing, how it’s given me extra power, easier power, just easier to play with it day in and day out.  And I think have the spin necessarily, but have the control there, too.
“I must say I’m overall very happy, and it’s exciting to play with a new racquet after so many years.” 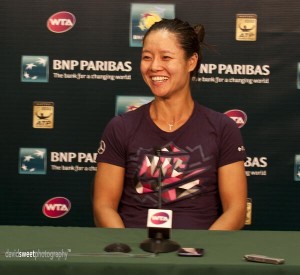 Top seed Li Na defeated Karolina Pliskova 6-3, 6-4 to reach the fourth round of the BNP Paribas Open.
“At least I can win the last point, and still, how do you say, stay on tournament,” Li said.
“You know, always tough, because first time to be the top seed in a big tournament and never have, how do you say, experience before.
“So it’s very tough to hang in there, especial beginning the tournament start.”