You are here: Home / Features / Rafael Nadal Upset by Alexandr Dolgopolov in Third Round of BNP Paribas Open 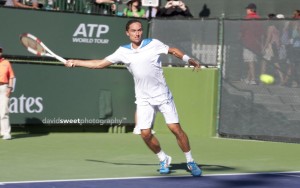 (March 10, 2014) INDIAN WELLS – Defending champion Rafael Nadal fell to Alexandr Dolgopolov 6-3, 3-6, 7-6 (5) in the third round of the BNP Paribas Open on Monday.  It proved to be a bad day for defending champions as Maria Sharapova was upset on Stadium 1 in the match before Nadal.
It was just last month in Rio that the Spaniard beat the 27th seed for the title in straight sets. Coming into Monday’s match, Dolgopolov had never even taken a set off of the world No. 1.
“I feel great, I mean, as after every win, of course,” said the winner.  “This one was bigger and I beat the defending champion, No. 1 in the world.
“I guess I just need to enjoy this evening and forget about it tomorrow and try to compete the rest of the tournament.  I’m still in.  That’s great, and I’m really happy I could manage to win today.
After splitting the first two sets, Dolgopolov took a 5-2 lead in the third.
Nadal rallied, taking the next three games. Both men held to take the match to a tiebreak.
Nadal grabbed a 4-2 lead in the tiebreak, Dolgopolov won the next three points for a 5-4 lead. Nadal evened it at 5-5, but then hit a ball long to give Dolgopolov the only match point he would need.
“I knew I’m playing well enough to win,” said the Ukrainian.  “The point was just not to get too nervous.  I knew he’s going to make me play that game and not miss much, and I just gave it away.  That was all on me.  I didn’t serve, didn’t play well, and I just tried to forget about that and come back.
“I think I did quite well service game at 5‑All, and the tiebreak was really good at the end for me.” 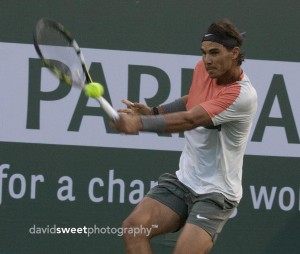 “I played bad,” Nadal said.  “That’s all.  Disappointed with the way I played.  But that happens sometimes.  Can happen, and it happens.
“I did all what I had to do to be in good shape.  I worked very hard for the last week, week and week and a half.  After Rio I had a few days off, three days off, to recover the back.  Then I think I worked great.  I think worked great and with good feeling.
“But since I started the competition here I didn’t find the right feelings.  It’s true that I played against two opponents that probably didn’t help me to get the rhythm in the tournament.  But that’s it.  I was there.  I saved tough situation the first day.  Today I was close to save another one.
“But at the end, when you are on the limit, this thing happen.  You can lose.  I lost today.  Congratulate him.  He played I think better than me.  That’s it.  Life continues.
“Gonna keep working hard to try to be ready for Miami.”
“When I have two breaks in one set, normally I don’t lose the set,” Nadal explained.  “He played great.  He’s playing well, much better today.  Had good tournaments in Rio, in Acapulco, so great what the things that he is doing.
“But today.  At the end I have to analyze my part and opponent.  I cannot talk about the opponent because what the opponent does is not in my hands.  I can talk about what is in my hands, and what is in my hands I didn’t play enough solid today.
“I had enough breaks to win the match, but I didn’t play enough well from the baseline then to be solid with my serve.  Is not a problem with my serve.  Was more problem with my baseline shots.  I didn’t go for the points.  I played with too many mistakes.
“It’s a moment for the people to be proud a little bit for someone from their country,” Dolgopolov said, in reference to the political unrest going on between Ukraine and Russia.
“That’s good.  As I said a lot of times, it’s good to make some results and make the people forget a little bit and have some happy moments in the news except the politics and all the bad stuff happening.”
“It’s good to make some results and make the people forget a little bit and have some happy moments in the news.”
Despite losing the match, Nadal let in total points – 95 to 88 and Dolgopolov had more errors 49 to 36.
The Ukrainian will play Fabio Fognini for a place in the quarterfinals.