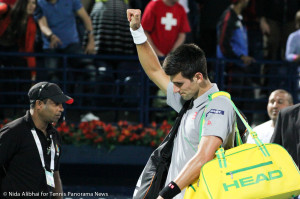 (March 11, 2014) INDIAN WELLS – Novak Djokovic was tested in the middle set against Colombian Alejandro Gonzalez, but the Serbian pulled out a 6-1, 3-6, 6-1 win to move into the fourth round of the BNP Paribas Open on Tuesday.
Other men advancing were 24th-seeded Marin Cilic of Croatia, who defeated 16th-seeded Tommy Robredo 6-4, 6-3; 30th-seeded Fernando Verdasco  who beat No. 8 seed Richard Gasquet, 7-6 (5), 6-1 24th-seeded Marin Cilic of Croatia, who beat 16th-seeded Tommy Robredo 6-4, 6- and Roberto Bautista Agut stopped  Jarkko Nieminen, 6-2, 4-6, 7-6 (6).
On the women’s side. 2010 champion Jelena Jankovic defeated 2011 champion Caroline Wozniacki 6-3, 6-1 in the battle of former No. 1s. Also Advancing on the women’s side were No. 6 seed Simona Halep who stopped Eugenie Bouchard 6-2, 1-6, 6-4; Casey Dellacqua of Australia moved on due to Lauren Davis pulling out of the tournament due to gastrointestinal illness and Maria Sharapova conqueror Camilia Giorgi was dismissed by her Italian countrywoman Flavia Pennetta in 56 minutes 6-2, 6-1 to reach the quarterfinals.
Two-time Indian Wells champion Djokovic had 28 winners in the match against Gonzalez. The Colombian before this week had never won an ATP Tour level match until Indian Wells.
“I honestly haven’t seen him play ever before that,” Djokovic said of his opponent.  “I got information from some other players, and my coach did preparations also for the match.  You know, asked also a few players what his weaknesses and strengths are in the game.
“It took me a little bit to get used to it, you know, but I thought I played really well from the start.  6‑1, and then his opening few games, service games, I had break points, and then suddenly I just had a big loss of concentration and allowed him to win the second set for no reason.
“Bounced back better in the third, but I obviously cannot allow myself to have these particular concentration lapses in the match at this level ‑ especially in the next match when I’m playing Cilic, you know, a guy who is in really good form and I think has gotten better in last couple of months working with Ivanisevic.
“So I’m going to have to be on top of my game throughout the whole match in order to win it.”
Djokovic plays Mari Cilic next.
“I’ve played him (Cilic) several times on different surfaces,” Djokovic said.  “We haven’t played each other for quite a long time.
“He started working with Goran, and as I said before, you can feel and you can notice the improvement in his game.  He’s more aggressive.  He comes to the net.  He’s a big guy, and that’s what you expect from him is to serve big and to come to the net.
“He’s using his serve as a big advantage nowadays, and also I feel like he’s moving better on the court.  He did before ‑‑ obviously he had this injury and then was absent from the tour for several months, but since he came back he’s a stronger player.
“I have been watching him playing some big matches.  He won against Murray in Rotterdam in straight sets.  He can definitely can play.  And not just play, I mean, he can win against top players.  That’s why I do not even for a second underestimate him.
“I’m coming into the match knowing that I’m going to have to be playing on top of my game in order to win that match.  I’m going to get myself ready for it.” 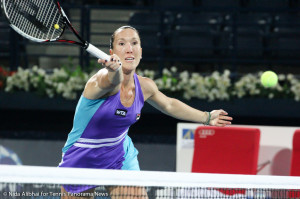 Djokovic’s countrywoman Jelena Jankovic routed Wozniacki 6-3, 6-1. Depending on how other players perform, Wozniacki’s ranking could fall to No. 15 in the world.
“I lost to her the last I don’t know how many times, but I think right now I am playing some pretty good tennis,” Jankovic said of finally ending a five-match losing streak against the Dane.  “I went on court, you know, trying to wait for my chances.
“Against her, if you go sometimes for too much you just make so many errors and you beat yourself.  A lot of times it happened in the past.
“So I try to play solid and aggressive at the same time, wait for the right shots, and then execute.  I did that pretty well.  3‑1 I kind of found my way, found my rhythm, and I was striking the ball very well out there and took control of the points.
“You know, I just did not let her play what she plays.  That was very important.  So I was pretty pleased with the way I played and how composed I stayed throughout the whole match.
“I kind of surprised myself, especially because of my back.  Two nights ago I hurt my back, and yesterday did not hit at all.  Had a lot of treatment.  Could not put my shoes on and all these kind of things.
“So I went on court today not knowing how I was going to feel.  You know, if I was going to be limited with my movement or if I was going to play my game.
“But I did, and I was surprised.  I was so happy and pleased with how everything went.”
Jankovic will play second-seeded Agnieszka Radwanska in the quarterfinals.