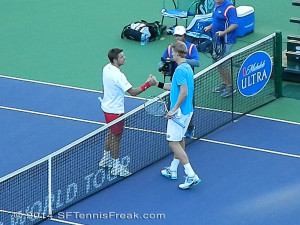 By Kevin Wright
(March 12, 2014) INDIAN WELLS – With a strong first-round win over Ivo Karlovic, and the loss of just two games to Andreas Seppi, it was a foregone conclusion that Australian Open champion Stanislas Wawrinka would stretch his win streak to 14 matches for a spot in the BNP Paribas Open quarterfinals.
His opponent, Kevin Anderson of South Africa, had other plans; knocking out the World No. 3 in three sets 7-6(1), 3-6, 6-1. Anderson had previously lost to Wawrinka in their three previous meetings, but felt good about his chances in today’s R16 match because they were all closely-contested. This was particularly true of their last meeting at the 2013 Shanghai Masters.
Wawrinka won that tough three-setter by the slimmest of margins in a third-set tiebreak, 6-4, 3-6, 7-6(5).  One of the lessons that Anderson learned from that match was the need to be more aggressive. This was evident from the start with an early break of the Wawrinka serve.
“That was my game plan coming out.  I had played Stan a few times before, most recently in Shanghai last year, and just being quite aggressive and not giving him too much rhythm from the back.”
That aggressive play was almost his undoing as his error count rose in the second set. It didn’t help that Wawrinka, appearing injured and on the brink of retirement at the end of the first set, came back from the brink to win the second set.
An awkward lunge at a backhand initially led to some tense moments as Wawrinka armed serves and swatted at backhands with limited range of movement. Wawrinka said, “It’s just tightness. And I was a little bit nervous and tight and tired.”
When asked if he’d thought of retiring, he brushed aside the injury talk. “No, never.  As I said, the injury was not big problem at all.  Not at all.  Because I won the second set after.”
“I think I was negative all the match.  I was complaining a lot about my serve, about the way I was playing, and with that, I don’t deserve to win matches. I think I should have been more positive with myself, just trying to find solution, because it was still a close match.”
Anderson got back on track in the third set, but can’t be happy with the stats sheet. He served 11 aces against 8 double faults, and a whopping 40 unforced errors against 34 winners. Still, he continues a run of good form that has seen him play some of the best tennis of his career.
Anderson struggled mightily with injury issues (and surgeries) just a few years ago. Now that the worst is behind him, he attributes much of his current success to having a few relatively healthy years to work on his game. “I have really put as much emphasis as I can on giving myself the right amount of breaks and, really fortunately, being in the position where I can pick and choose my tournaments has helped a lot.”
“Staying healthy is such an important thing.  It sounds obvious, but if you’re not at 100% it’s really tough to compete. ”
Anderson will have his hands full with his next opponent, Roger Federer. But he feels more than up to the challenge.
“I have to come out and focus on my game and just do what I have been doing.  I feel like I have been playing good tennis, and I’m going to definitely continue that tomorrow.”
Kevin Wright is in Indian Wells covering theBNP Paribas Open for Tennis Panorama News. Follow his live updates on twitter @TennisNewsTPN.