You are here: Home / Contributors / A Day of “Firsts” for Flavia Pennetta and Novak Djokovic at the BNP Paribas Open 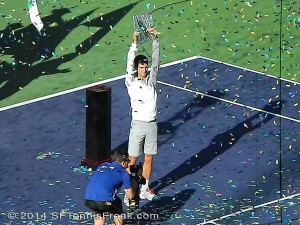 By Kevin Ware
INDIAN WELLS – It was a day of “firsts” on finals Sunday at the BNP Paribas Open. Flavia Pennetta won her first WTA Premier Mandatory title by defeating a hobbled Agnieszka Radwanska, and Novak Djokovic won his first title of 2014 by outlasting Roger Federer in a dramatic 3-set final. The respective paths to their titles couldn’t have been more different.
In an unexpected turn, Pennetta overwhelmed an injured Radwanska 6-2, 6-1 for the biggest title of her career. “After so many years and so much work and everything, this is the moment I was waiting for,” Pennetta said. “And it comes when you least expect it.”
Her surprise is understandable given the struggles she endured in 2013. Pennetta lost to countrywoman Francesca Schiavone in the first round of last year’s tournament: one of many bad losses she suffered after her return to the tour from wrist surgery in 2012. Thoughts of retirement crossed her mind.
“The day after I was in the garden running and talking with my physio, Max, almost crying because the feeling and everything was so bad. And now, after one year, we have the trophy.”
Pennetta played solid tennis, but never needed to do more considering the condition of her opponent. Radwanska’s knee has been hurting the past few days, but she hoped that she might still be able to compete.
“This is the sport that you’re always playing with some pain or injury or sore muscles,” Radwanska said.  “But when the pain is so big that nothing is working, no painkillers, no tape. That means it is bad. Today nothing was working.”
“Unfortunately, it was too much pain.  I tried because this is the final, and I thought, you know, maybe in one game was going to be better and I would just keep going, but that didn’t really happen.”
Disappointment at not being able to compete at her best level weighed heavily on Radwanska, her voice breaking as she wiped away tears during the trophy presentation. She apologized for not being able to run as much as needed to in order to compete. Judging by the supportive crowd response, no apology was necessary.
This is Pennetta’s 10th WTA title, and her first since 2010. With this win, Pennetta moves to No. 12 in the rankings. Radwanska remains in the No. 3 position behind Serena Williams and Li Na.
In the men’s final, Novak Djokovic had to fight tooth and nail to defeat a resurgent Roger Federer 3-6, 6-3, 7-6(3) for his first title of the year. It was a high-quality match that fittingly came down to a third-set tiebreaker to decide the winner.
Federer won the first set with skillful serving and masterful ball-striking on his forehand side. His first serve percentage was 74%, and he won 75% of his first serves and 71% of his second serves. Anytime you’re over 70%, odds are good for a victory. Federer also hit 12 winners to only 9 unforced errors. His defense was solid, and he craftily mixed backhand slices to keep Djokovic successfully out of any rhythm.
By comparison, Djokovic served at 59%, and won only 36% of his second serves. He also only hit 5 winners to 6 unforced errors. He was tentative, and mistimed many shots badly. Djokovic readily acknowledged his slow start.
“Yeah, it wasn’t a great start for me.  First service game that I had I made a few double faults and unforced errors and allowed him a break.  That was enough for the first set.”
“Roger is probably best in the world when he’s up.  When he’s a break up, he wins his service games so comfortably and so fast that sometimes it’s very difficult to keep up.  But I managed to stay composed and stay confident.”
The second set saw an obvious drop in Federer’s game, both in serve and unforced error count, as Djokovic found his footing. An early break in hand, it wasn’t long before Djokovic served out the set at 6-3 to take the match to a deciding set.
Federer’s level continued to fluctuate badly, and he gave up an early break in the third. But to his credit, he fought hard and stayed close enough to Djokovic to take advantage if any break opportunity presented itself.
The opportunity came at 5-4 with Djokovic serving for the championship. Federer pounced and immediately put him under pressure. A few minutes later with the break under his belt, Federer held serve at love.
Unfortunately for Federer, the third-set tiebreak was all one-way traffic for Djokovic. After over two hours of shot-making drama, he netted a backhand on match point to hand Djokovic the win.
This is Djokovic’s third Indian Wells title. It’s also his 42nd title overall, moving him ahead of Stephan Edberg, and his 17th Masters Series title. In a year where he’s failed to win a title – or make a final – until three months in, his relief afterward was palpable.
“I’m just very happy and thrilled to be able to win the first title in this season.  It was the first final that I played this year.  It was necessary for my confidence, and hopefully I can carry that into Miami and the rest of the season.”
Federer leaves the desert with confidence in his game, and an appreciation for his continued fitness. “I’m just happy I’m playing consistent tennis and I’m going deep in tournaments and I’m giving myself chances to win.  So clearly would have been amazing to win here and win back to back tournaments with Dubai.”
“But I got very, very close, so it’s encouraging for Miami and for the rest of the season, no doubt.”
Kevin Ware was in Indian Wells covering the BNP Paribas Open for Tennis Panorama News. Follow his personal twitter @SFTennisFreak.