You are here: Home / Features / Novak Djokovic Coming into Miami with Renewed Confidence 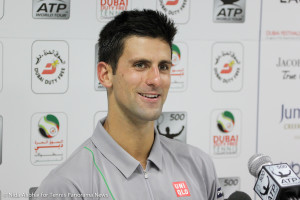 (March 20, 2014) Novak Djokovic came into Indian Wells not having won a tournament for the first time in four years. His comeback win over Roger Federer on Sunday 3-6, 6-3, 7-6 (3) gave the world No. 2 his third BNP Paribas title. The win also renewed his confidence.
“Well, it is, in some kind, a relief for me, because I haven’t had a title this year up to Indian Wells,” Djokovic said.  “Indian Wells final was the first final of the year.  I haven’t played many tournaments; I haven’t played many matches.
“So I knew I’m playing well.  I had incredible end of 2013, so I did have confidence.  But I started a little bit doubting myself on the court.  You know, I was struggling a little bit with my, I would say, consistency and the concentration.  Throughout the tournament also I had ups and downs, but I managed to win four out of six matches in three sets.
“Mentally it’s a very encouraging win that gives me confidence and that also, you know, is very special in a way.  This time of the year I needed it very much, and hopefully I can carry that into this week.”
Djokovic comes to Miami without the head coach of his team, tennis hall of famer Boris Becker.
“He’s unable to travel,” Djokovic said.  “He has surgery of his both hips today and tomorrow, so that’s unfortunate.  He couldn’t come.”
“He was supposed to come here.  Basically in the finals of Indian Wells he called us and said that he had an emergency and he has to operate both hips.”
The Sony Open is the site of one of Djokovic’s first big tournament wins.
“I have had much success in this city before I won my first big title back in 2007.  I remember here was my first Masters 1000 event.  So I have really good memories.
“I always look forward coming back to Miami this time of the year.  It’s nice weather.  As I said, a lot of fun on and off the court.”
Djokovic will face Frenchman Jeremy Chardy in his opening match during Saturday’s day session.