You are here: Home / Features / A Healthy and Happy Federer Returns to the Top 5 in Miami 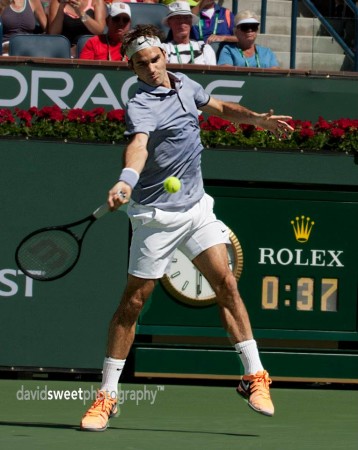 (March 20, 2014) After a 2013 which saw him end the year at No. 6 dealing with back problems, and then fall to No. 8 at the end of January, Roger Federer is on his way back up. He’s currently No. 5 after falling in the BNP Paribas Open final last Sunday to Novak Djokovic in three sets.
In his pre-tournament news conference at the Sony Open on Thursday, Federer spoke about his resurgence since the beginning of 2014.
“It’s nice, but I’m more happy to be healthy again, and I’m playing good tennis,” said the Swiss No. 2.  “That then leads the ranking into the right direction.
“Yeah, I have been playing well now for the last seven tournaments.  Started at the end of last year, and now I feel I found a good level, a good form.  But as you know, you have to keep on working and keep on trying hard.
“It always resets.  Every tournament it starts from scratch.  I don’t get like the old wildcard into the semis or anything like that.  Doesn’t exist.  I have to put in the hard work and hope I’m going to have another successful tournament here in Miami.”
Even world No. 2 Novak Djokovic commented on Federer’s level this year:
“I think he’s playing in a high level this year.  He’s back to his normal level, you know, the level that he had for seven, eight years while he was so dominant in men’s tennis.  Obviously last season he was not as good for his standards.
“You know, but this year he started strong.  He won the title in Dubai and played semis of Australian Open.  I can feel that he’s striking the ball very cleanly.  He’s very confident on the court and he has improved his backhand I think.”
So how much better can Federer get this year?
The Swiss answered: “Well, I just think the confidence is going to make the difference maybe at this point, because my body is there.  Clearly will always be helpful to put in a training block where you are training very hard, can improve your potential a little bit, where your stamina is better, where your confidence and your endurance and explosivity is there.  You name it.  Your strength overall.
“I think at the end it comes down to confidence with most of the players.”
Federer and wife Mirka are expecting a child later this year, they are already the parents of twin girls born in July of 2009. Federer was pressed by a couple of members of the media to give the due date of the birth.
“Only my wife knows, I told you.  If I knew, I wouldn’t tell you,” Federer replied with a smile.
Federer will play his first match against Croatia’s Ivo Karlovic during Friday’s day session at the Sony Open.