You are here: Home / Front Page News / Fashion Statements in Notes and Quotes at the Sony Open

(Match 20, 2014) On Thursday at the Sony Open some of the players were asked about their “fashion” and “style” on and off-court. Here is what some of them had to say. 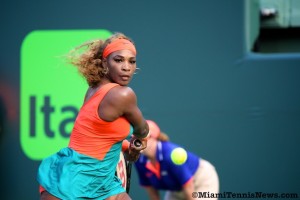 The world No. 1 sported Miami Dolphins colors on court on Thursday. The 17-time major champ is a co-owner of the NFL team.

Actually, we’re playing ‑‑ Nike and I wanted to pay homage to my team that I co‑own, so it was like, We should totally do the Dolphin colors.  Just have something really fun for Miami.  You know, Dolphins are great, so just, Go Dolphins, go Fins. 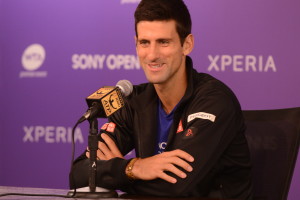 The World No. 2 was asked about his inspiration in designing his outfits.

You mentioned Andre Agassi.  I mean, he definitely revolutionalized the fashion in tennis.  He was the first one to dress differently and to have some kind of statement on the court.
Well, I have been through a process in my career, as well.  I had different dragons and wings on my shirts (smiling).
But I’m at a different stage right now.  Of course I’m very much involved in giving ‑‑ trying to give my input as much as I can to design my own clothes.  I’m fortunate to have a really good team of people and designers from Uniqlo Company who represents me the last two years.
There is various, I will say, inspirations behind the certain designs for different periods of the year depending on color of the surface, depending on the time of the year, depending where we go, color of Serbian flags, so forth and so forth.
So there are different sources of inspiration we are trying to put into the design and kind of create something that looks nice on the court. 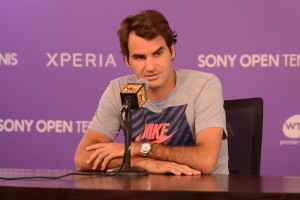 The Swiss No. 2 and 17-time major champ had a question posted to him about his process of picking out colors and styles and if he had any fashion advice.

Well, normally, look, it’s great to see fans wearing the RF cap, you name it, or Nike in general.  It’s like a tag of approval maybe in a way that they enjoy what I’m wearing.  They feel like they’re connected to me, which I do feel is the case.
The hard part is deciding today what I’m going to wear for US Open next year.  It’s kind of hard, you know, sometimes to put myself in the right mind and mindset to know, Am I going to like, you know, stripes in one‑and‑a‑half years?  I’m not sure, you know.
Right now I maybe do, but maybe one‑and‑a‑half years maybe not so cool.  That’s the hard part when we work together with Nike.  But I really enjoy the process, and it’s nice to be part of it rather than just getting stuff and then not liking or loving stuff.
It has that element where you can be part of it.  My advice probably is you’ve got to make sure you wear the clothes and not the clothes wear you.  It’s quite simple in a, way but don’t wear something you totally feel uncomfortable with, but, you know, take some chances.  Play around a bit.
I felt very uncomfortable in suits when I was younger, so what I just started doing was wearing suits when I was going to dinner.  I used to overdress a little bit so I got used to wearing suits.  Now wearing a suit is like wearing a track suit for me.  So it’s all good. 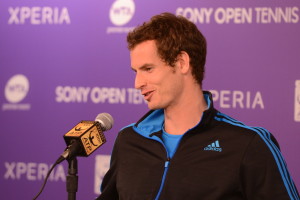 Andy Murray was asked how players showcase through fashion and individual styles.

This is a tough question for me.  I don’t really know how to answer it (smiling).
To be honest, I mean, I just like wearing on the court what’s comfortable.  So long as the products work well, then that’s the most important thing for me.
I mean, adidas, the way they work is they tend to have their ‑‑ they have their own colors, so all of the players wear a fairly similar kit; whereas some of the other companies, you know, it’s more sort of individual.
So you see that player’s sort of style or what they like a little bit more.