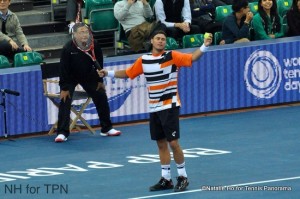 (March 20, 2014) Former world No. 1 Lleyton Hewitt became the third active player to win 600 matches on the ATP World Tour on Thursday when he came back to defeat Robin Haase 3-6, 6-3, 6-3 in the first round of the Sony Open.
The 33-year-old veteran who captured major titles at Wimbledon (2002) and the US Open (2001) now joins an elite club with Roger Federer with 942 wins and Rafael Nadal with 675 wins in reaching a milestone.
“Today was just like another match and an opportunity to go out there and play well,” Hewitt said
“Yeah, obviously afterwards, you know, a great milestone.  Not many people get to achieve that.  Not many people get the opportunity to get close that, so means I have been around for an awfully long time, as well.  I’m getting old.
“Few years ago when I had the last couple lot of surgeries I probably would have doubted I’d get to this stage anyway.  I’m still grateful I’m out there and able to compete with the best guys.”
Hewitt spoke about ATP win No. 1 which came in his hometown event. “I was lucky enough to get a wildcard at the Adelaide event,” the Australian said.  “I won the tournament.  Yeah, I beat my good mate ‑‑ well, turned out he was my good mate probably six months, Scott Draper, another Australian Open in the first round.  We always joke about that.”
In the second round has the uneasy task of raking on World No. 1 Rafael Nadal.
“I still play the game to have an opportunity to play against the best guys in the world, and, yeah, Rafa is,” Hewitt said.  “No doubt about it.
“I look forward to the challenge.  This is, you know, obviously a really tough draw and frustrating, you know, you don’t get to have a crack at him later in the tournament.
“But, yeah, I’m happy to get to go out there and play against Rafa.”
While Hewitt was out making history with his 600th win, fellow Australian Bernard Tomic made some history that he will want to forget.
Tomic, making his first appearance at a tournament since double hip surgery lost to Jarkko Nieminen 6-0, 6-1 in 28 minutes – a record for the shortest match ever on the ATP tour