You are here: Home / Features / Roger Federer Returns to Sony Open with a Win Over Ivo Karlovic 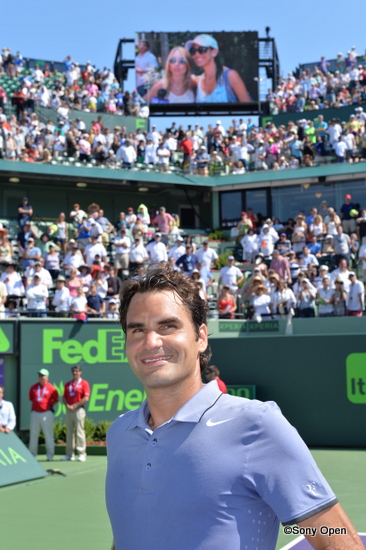 (March 21, 2014) Roger Federer returned to the Sony Open on a winning note beating hard-serving, 6-foot-11 Ivo Karlovic 6-4, 7-6 (4) on Friday. Federer missed playing last year’s event in Key Biscayne and was entertained by a video tribute on the stadium scoreboard.

With a giggle and a laugh, the 17-time major champion told the crowd that it looked like a farewell video. “I miss one year, and you make me feel guilty,” he said.

Federer committed a mere 3 unforced errors during the match. In addition he won 49 of his 52 service points.

“I think I was able to play a very clean match on my service games throughout, make sure I had a lot of first serves in, make sure I stayed aggressive from the baseline, had an opportunity,” Federer said.

“I think it worked really well, hardly any unforced errors, I was playing with margin, was able to move Ivo around, and I was able to maintain that throughout the match, which was key.

“Like this I could focus a bit on returning while then holding serve, which is important against Ivo.”

“I’m very relieved and happy to be through,” Federer told media.

So what’s it like to play the big-serving Karlovic?

“Physically it’s super easy,” Federer said.  “There are no long rallies.  It’s just like more penalty shootout like in soccer.  I don’t want to say you pick sides, but it’s about quick reaction, not getting frustrated and feeling that the returner is the one who has got less pressure.

“I quite like it.  I enjoy it.  It’s just uncomfortable at times when it comes to the crunch of the sets and you have break points and you know like this is probably your only chance in the set or you know that probably next four or five games you won’t see any more break points, or even for the rest of the match.

“So it just can be quite difficult or overwhelming.  But if you’re in the right mindset mentally, it can also be enjoyable.  That’s how I approach the match, anyway.”