You are here: Home / Features / Novak Djokovic Moves Into Sony Open Third Round 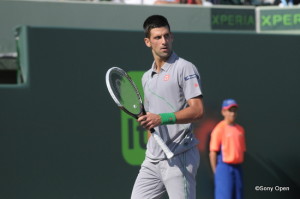 (March 21, 2014) Three-time former Sony Open champion Novak Djokovic defeated Jeremy Chardy 6-4, 6-3. The Serb converted on all three break points he had against Chardy.
“When I was supposed to play my best and come up with some good serves and good shots, that’s what I did in both sets,” Djokovic said.
Chardy hurt his right ankle in the eighth game of the second set.

“I assume it was quite bad,” Djokovic said.  “He twisted his ankle.  I talked with him after the match.  He’s still in physio room, so he says it’s not as bad as he thought.  But I wish him recovery.”

One of the keys to the world No. 2’s success has been the improvement of his footwork.

“Footwork is essential,” he said.  “If you want to hit the shot properly, you have to be in the right balance.

Obviously variety of surfaces require variety of footwork and adjustment in the same element.

“I have been dedicating quite a lot of time on and off the court to that matter, and I have been fortunate with a team of people that I have.

I think they are experts in their fields, in their professions, and they are making sure I am, you know, developing that footwork, you know, regarding the place or the surface where I’m playing.

“So I think it’s very, very important, if not the most important thing.”

“I love this sport,” Djokovic said.  “I just love going out and I enjoy competing.  I enjoy, you know, playing the tournaments over and over again, you know, trying to win as many titles as possible, trying to, you know, strive for some kind of perfection, if there is a perfection in this sport, you know, always to get better.  We will see how far I can go.”

Djokovic will now get ready to play Florian Mayer in the third round.

In the last match on Stadium Court, defending champion Andy Murray, playing for the first time since he split with coach Ivan Lendl, rallied from a break down in the third set to beat Matthew Ebden 3-6, 6-0, 6-1.