You are here: Home / Features / Stanislas Wawrinka Back to Winning Ways at the Sony Open 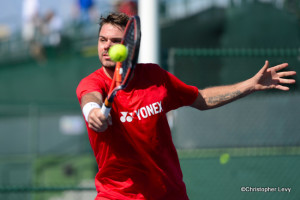 (March 22, 2014) Stanislas Wawrinka improved his record to 14-1 on the year defeating Daniel Gimeno-Traver 6-0, 3-6, 6-3 in his opening match on Stadium Court at the Sony Open.
The match was a bit of a test for the No. 1 Swiss player who is participating in the Key Biscayne event for the first time since 2011.
“I start well really first set.  It wasn’t going that well, but I was positive, ready.
“Problem is I still have some up and down mentally.  I was negative in the second set a little bit stupidly, but then I’m really happy the way I start the third set.
“Was important to come back strong, to move well again, to play aggressive, to push him, and was important to get the break early.
“I think then was okay.  I’m happy to win.  That’s the most important.  First one here, it’s never easy.  The condition was really slow today, really humid.  You need to get through.  That’s it.  That’s the most important, just winning matches.”
The Australian Open Champion is very happy with his reception in Key Biscayne.
“It’s been great,” Wawrinka said.  “I have been here since one week.  I was practicing since Monday here.  A lot of fan(s), a lot of people from South America, they always come to watch the practice.
“It’s normally a really good crowd.  They make a lot of noise.  They are really happy to be here.  The reception was great for me.
“I didn’t come last two year, so it was even bigger.
Now that Wawrinka has won a major, he was asked about his additional goals.
“Well, there is one goal that I have since many years,” Wawrinka said.  “It’s the Davis Cup.  Now Roger (Federer) is playing, so we know that we are a strong team to do something.  Well need to be careful, but we have a good chance to make a big result this year, and that’s so far the most important.”
Wawrinka and team Swirzerland will play host to Kazakhstan April 4-6 in the Davis Cup World Group quarterfinals.
“I need to focus on what I did before to win the Australian Open,” Wawrinka continued.  “That means I need to focus with my coach, try to improve my game, try to be 100% every day on the court, try to always fight, always try to be at my best in every matches.
“And if I do that, I know I’m going to have some great results this year.”
Wawrinka will face Frenchman Edouard Roger-Vasselin in the third round.