You are here: Home / Features / Serena Williams Pushes Past Caroline Garcia into Miami Round of 16 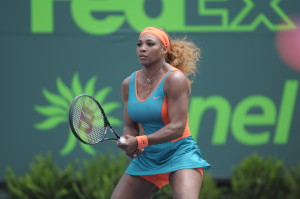 (March 22, 2014) In a match in which the world No. 1 committed 41 unforced errors, Serena Williams survived up-and-comer Caroline Garcia of France 6-4, 4-6, 6-4 to reach the fourth round of the Sony Open on Saturday.
The 20-year-old Garcia made Williams work – moving the 17-time major champ around the court and blasting serves which were clocked as fast as at 117mph in the two-hour and 30 minute match.
“She plays well,” the 32-year-old Williams said of Garcia.  “I really gave myself a tremendous amount of trouble out there.”
“I think, granted she played great, but I made so many errors.  I hit so short.  It really isn’t the same player.  I just have to do better.”
“It was a good match to play and it was good test for me because she’s good player and she’s always fighting a lot,” Garcia said.
“I’m happy what I did but still disappointing because I didn’t win, but it’s good match.”
“Obviously I wasn’t at my best,” Williams continued.  “I had 40‑ something errors.  It’s not the way to play professional tennis.  Maybe amateur.
“On the professional tour you have to do a little better than that, so hopefully I can, in the next few matches, to do better.”
“She has a great serve,” Williams said complimenting Garcia’s game.  “She does everything well.”
“I think she’s a good player.  I also think I can test myself and say, Look, I can play a hundred times better than what I played before.  I’m capable of doing so much better.  I just have to get to that level.”
Williams hopes to pick up her level of play in the fourth round when she competes against the winner of the Samantha Stosur – Coco Vandeweghe match.
Six-time Sony Open winner Williams is seeking to defend her crown and win a record–setting seventh title.