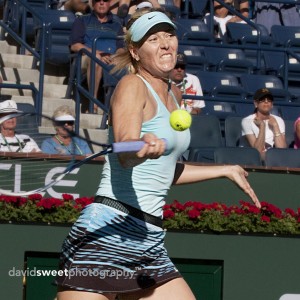 (March 22, 2014) Maria Sharapova was pushed hard by Lucie Safarova 6-4, 6-7(7), 6-2 in a three hour contest to move into the round of 16 at the Sony Open. The No. 4 seed won the match on her ninth match point over a pesky opponent, 56 minutes after her first match point, which came in the second set tiebreaker.
Safarova saved 6 match points against Sharapova in the final game of the match with a series of winners.
“There are so many emotions and there are so many ups and downs,” Sharapova said. “You finish off the first set and then I was down a couple of breaks in the second.  Then I brought it back up, and then I had my chances to win that match.  And then it went to a third.
“So of course you’re going through a lot, that I was really happy that I was able to come back after losing the second set and not letting that affect me, although it’s always challenging to know that you had the match so close.”
At the end of the match, instead of the traditional handshake, the women exchanged hugs.
“She was coming up with some really good shots,” said the winner.  “There was not really much that I could do.
“She’s going for her shots and she was hitting winners on the run.  I tried to stay focused, and I think I did a good job of that.  It would have been very easy to let that game go.
“I’m happy to be sitting here winning the match,” the Russian said in press.  “Obviously it was tough to lose that second set after having a couple of match points, but I was really happy with the way I came out.”
Both Sharapova and top seed Serena Williams’ matches were three-set thrillers. Williams stopped Caroline Garcia 6-4, 4-6, 6-4.
Serena Williams Pushes Past Caroline Garcia into Miami Round of 16
In the past, early round matches for the women were considered by some as “warm ups” for the rest of the tournament. Sharapova said that nowadays that’s not the case and that women’s tennis is much more competitive.
“I’d say five years ago I’d say you’d consider the first couple of rounds as a warmup to the tournament,” said the fourth seed.  “You don’t see that now.  You don’t see players that are seeded playing the first round, but they have had great wins.
“Someone like (Caroline) Garcia, she’s played three sets against me.  She’s an up and comer and playing really well.
“So we all know that everyone can play, and that’s really why there is a draw and the net goes up in the morning, is because you have to play those matches.
“But it is exciting for women’s tennis.”
In other women’s action on the day:
No. 9 seed Sara Errani fell to Ekaterina Makarova 6-3, 2-6, 6-4.
Kirsten Fipkens advanced into the next round when No. 14 seed Sabine Lisicki withdrew from the tournament due to the flu.
Other seeds advancing on the day were No. 5 Angelique Kerber who beat Tsvetana Pironkova 6-0, 6-2, No. 12 seed Ana Ivanovic who topped Indian Wells winner No. 20 seed Flavia Pennetta 6-4, 6-3, No. 8 Petra Kvitova who beat teen qualifier Donna Vekic 6-3, 6-4.