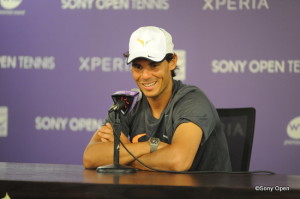 (March 22, 2014) Rafael Nadal dominated Lleyton Hewitt on Saturday night 6-1, 6-3 at the Sony Open.
Back on Thursday Hewitt joined Nadal and Roger Federer as the only active players with 600 or more career wins on the ATP World Tour.
Lleyton Hewitt Reaches 600th Win Milestone
“I think I played a solid match with not many mistakes,” Nadal explained.  “It’s true that I am having the feeling of the back better for two weeks already, so I start to feel a little bit more comfortable with the serve because I am able to practice a little bit the serve and to do the normal movement again.
“So that’s important thing for me.  And from the baseline, I think in Indian Wells I didn’t play the right way.  I think I played with too many mistakes.  Some good points; some bad points.  I tried to play with all the time the logical shot.
“So playing against his backhand, and when I had the chance change to the down the line with the forehand, no?  I think the good thing is I didn’t have a lot of mistakes.
“I think Lleyton played much better in the second set.  He played more aggressive.  I was solid with my serve.  Some good rallies.
“Very happy the way that I played at the end of the first set.  Start to feeling the ball very well with the forehand, changing directions.
“In general, I have to be very happy the way that I start, I think.”
Nadal moves into the third round.