You are here: Home / Features / Andy Murray Moves into Round of 16 of the Sony Open 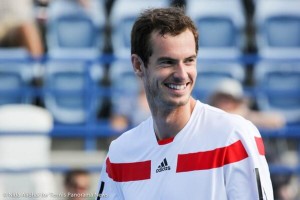 (March 23, 2014) Defending champion Andy Murray moved into the round of 16 at the Sony Open on Sunday.
The No. 6 ranked Murray maintained his perfect record against Feliciano Lopez at 9-0 dismissing the Spaniard 6-4, 6-1. Murray who is looking to defend his title from last year and claim his third crown at the Sony Open.
Murray, who just announced a mutual split with his coach Ivan Lendl last week, had his former coach in his box in the stands on Sunday. Murray worked with Lendl for two years and the partnership lead to the Scot winning an Olympic Gold medal in 2012, along with US Open in the same year and Wimbledon in 2013.
Andy Murray and Ivan Lendl Agree to Part Ways
“We’re back together again. It was only a four- or five-day split,” Murray joked after the match. “No, it’s a shame he won’t be watching many more of my matches from the stands.”
Murray’s mother Judy and admirer of Lopez’s form has been calling him “Deliciano” for the past few years. Murray led off the match by breaking the Spaniard’s serve and really never had to look back.
“It’s not always that easy to feel comfortable against him because there is not loads of rhythm with the way he plays,” Nurray said of his opponent’s game.
“But I moved well; returned well.  Yeah, it was obviously a more comfortable scoreline than the other day.”
Murray will face Jo-Wilfried Tsonga next after the Frenchman came back for a 4-6, 7-6(6), 7-5 victory over Marcos Baghdatis. He was when two points away from defeat at 5-1 down in the second set tiebreak.