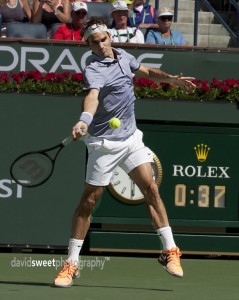 (March 23, 2014) Roger Federer took just 63 minutes to reach the fourth round of the Sony Open against Thiemo De Bakker winning 6-3, 6-3 on Stadium Court on Sunday.
Federer played a very clean match with 23 winners to 11 unforced errors, with no break points against him, going for 14 at the net.
Over the past two matches Federer has won at least 90% of his first and second serve points. He was asked if his new racquet has been a factor in his serve statistics.
“I definitely think some of it, for sure,” Federer said.  “I think it just gives me easier power, especially on the first serve.  And I think as time now goes by, I’m getting a better feel for how is the ball going to react, you know, how much spin do I need to put on to stay really accurate and put it really close to the line.
“Because that’s something I also struggled with last year and sometimes before.  It’s just to keep the pace up and keep accuracy up.  Right now I’m doing a good job.
“But then again, you know, this wasn’t Andre Agassi on the other side, or Djokovic.  It’s just important for me to keep that up and remind myself it’s going well so far.
“But you also need to put in the effort again, time and time again.  Then it’s not just to serve.  You know, people think, Oh, he’s winning all these points on first and second serve.
“But there are rallies after that.  It doesn’t just stop right after you’ve hit a serve.  So important it’s how do you back up your serve.  I think that’s also what I’m doing well now.”

Federer will play Richard Gasquet in the fourth round.
“We have played many times now in the past, and I’m not sure how he’s playing right now,” Federer said.  “I really don’t know.  I have to find out a little bit.
“I’m not sure about his results as of late, so I have to check a little bit.
“He’s got great game, you know.  Gives himself time, sort of that extra second of time on each shot, forehand and backhand.
“I played him in London recently at the World Tour Finals in ‑‑ I think it was our second‑round group match maybe.  I played a good match against him, but, you know, he’s overall good player.  Can serve well.  Can volley well.  He’s got nice shots, forehand and backhand.
“So he’s a good all‑around player, and I think he’s done well here in the past.  With the wind and the slower conditions, it works quite well for him.
“I think it’s going to be a tough match for me.”