You are here: Home / Features / Venus Williams Ekes Out Victory over Dellacqua 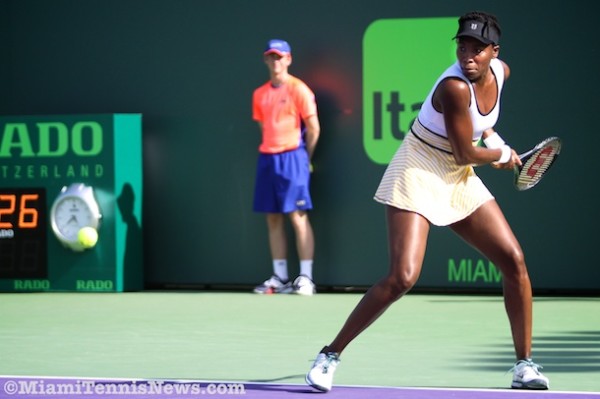 (March 23, 2014) Three-time Sony Open champion Venus Williams edged out wildcard Casey Dellacqua 6-4, 5-7, 6-4 to reach the fourth round on Sunday.
The match which lasted two-and-a-half hours saw Williams commit 44 unforced errors but she hit 11 aces in the win.
Williams moved out quickly to a 5-1 lead in the opening set but could not serve out the first set and Dellacqua got back on serve at 4-5. Williams broke to win the first set.
In the second set, the Australia went up a break but Williams evened out the set at 4-4. Dellacqua broke against and closed out the set 7-5.
Williams had a 4-2 lead in the deciding set only to see the lead vanish to 4-4. After holding serve, Williams broke serve to win the match.

“She’s playing so well and mixing her shots up so I knew it wouldn’t be easy, but definitely looking forward to the next round,” Venus Williams said.
“I do try and compete.  I mean, being out here, even if it’s not your best day, no matter what the circumstances are, for me, I just try to walk off the court knowing at least even if I didn’t play my best I gave 100,000%.”
Williams will face No. 10 Dominika Cibulkova, who beat No. 22 Alice Cornet 7-6 (6), 6-1.
“I don’t even know the last time I played her, but I know every time she plays Serena she competes so well,” Venus said.  “I think they played here last year in the semifinals.  I was watching that match.  It may have been a three‑setter.  I just remember it was very tough.
“When I get out there, I just have to see how she’s hitting the ball.  I know she hits it hard and goes for it.  We’ll see.  I just haven’t played her in so long.”