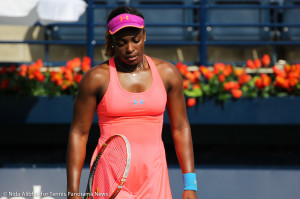 (March 23, 2014) No. 18 Caroline Wozniacki destroyed No. 16 Sloane Stephens 6-1, 6-0 on Stadium Court in less than an hour at the Sony Open.
“I’m pleased about the way I played,” Wozniacki aid.  Definitely very happy about the performance out there.
Stephens’ lone game in the match came on a break of serve, she did not hold her serve at all during the match.
“Just really disappointing night,” Stephens said.  Just got my butt kicked, and that’s about it really.
The statistics tell the story of the match for Stephens. She committed 37 unforced errors and hit only 12 winners. The American won only 26 points in the entire 55 minute match.
“Just try and make some balls in the court,” Stephens said in press.  “That normally helps.  Just, like I said, it was really disappointing.  Just wasn’t getting ball in the court.  She played solid.”
“It wasn’t like it was a choice or I had any chances,” she continued.  “It was just straight‑up bad.”
“I have been playing good, practicing good.  Everything has been good.  Just kind of a disappointing night for me.  It’s just something ‑‑ it just happened.  I couldn’t fight my way out of it.
“Not really anything I’m going to cry too much over.  I’m just going to get back to work and get ready for Charleston next week.”
Wozniacki was asked about her focus during the match when her opponent was not playing up to her potential.
“You actually have to stay even more focused because you know she’s going to go for it at some point,” said the Dane.  “Things can turn easy, especially when you’re up by a lot.
“The other person doesn’t have anything to lose, so you know you really have to be on your toes and expect anything.”
“So I just stayed focused out there.  I didn’t let her into the match.  I didn’t give one point away.  I was very happy about that.”
Wozniacki will play her fourth round march against Vavara Lepchenko.