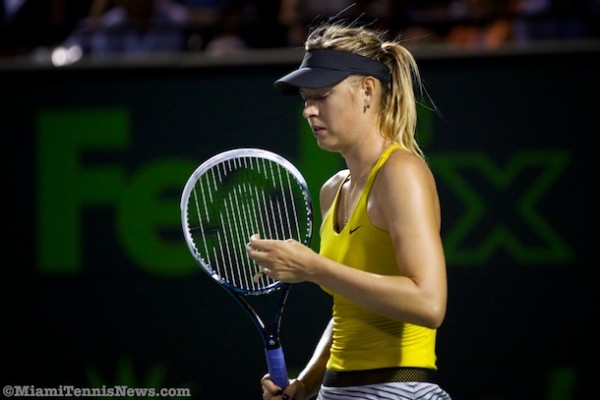 (March 24, 2014) In a tale of two different matches, expected results as No. 1 Serena Williams and fourth seed Maria Sharapova reached the quarterfinals of the Sony Open on Monday.
Williams dismissed American countrywoman qualifier CoCo Vandeweghe 6-3, 6-1 to reach the elite 8 in Miami for the 13th time in 14 appearances.
After her first two matches in the tournament she showed some rust, Williams cleaned up her game hitting 17 winners to only 11 unforced errors and stopping all six break points she faced.
“I was definitely happier today,” Williams said.  “I was really struggling my first two matches, so I just wanted to have a better performance today.”
“She’s improved a great deal,” Williams said of her opponent’s game.  “Her focus is so much better.  Her movement is good.  Her attitude is great.  She’s a nice girl.
“You know, it’s always fun to play with young Americans, I think, and just enjoy it.  It’s so good to see another American doing really well.”
Williams was so impressed with the young American that she spoke to her about possible playing doubles.
“She said, `Listen, you played so well. We’ve got to play doubles. We’d do so well,'” Vandeweghe said.
Next up for Williams will be the No. 5 seed Angelique Kerber, who beat Ekaterina Makarova 6-4, 1-6, 6-3.
“It will be good to play a different opponent,” Williams said.  “I feel like I have played the same person three times in a row.  It will be nice to play a lefty, someone that just plays different.
“Angelique has been able to beat me in the past, so I have to be really focused and be ready in that match.”

Maris Sharapova had to reset from a first set drubbing to beat Kirsten Flipkens 3-6, 6-4, 6-1.
The Belgium jumped out to a 4-0 lead in the first set and Sharapova could only win five points during those four games. In the second set Sharapova jumped out to a 4-0 lead, then Flipkens won 4 out of 5 games, but Sharapova broke serve to take the set 6-4.
“I usually like playing the first match, but I didn’t start off the way I wanted to,” Sharapova said. “Nothing was working.”
“Nothing was working in the first set,” Sharapova said. “Yeah, that’s just the way it went in the beginning.
“She’s a different type of opponent. There aren’t too many girls that hit a slice backhand 90% of the time in the rallies. You expect that because she’s been around for a long time, and it shouldn’t be that much of a surprise, but I wasn’t doing too much from my end and made a lot of mistakes from the first ball, which gives your opponent that confidence and the time they need to do whatever they want.
“It was about finding that combination of getting something in to give her something to play with.”
Sharapova’s momentum carried over into the final set where she kept her errors low and her aggression high, dropping only one more game.
Final stats for Sharapova- 36 unforced errors, 13 winners and 10 double-faults.
Sharapova will play the woman she lost to in the 2011 Wimbledon finals, No. 8 seed Petra Kvitova in the quarterfinals. Kvitova regrouped to stop Ana Ivanovic 3-6, 6-0, 6-0.
“We haven’t played for a long time, but we have always had interesting, tough matches against each other,” Sharapova said about her next opponent.  “I think we know what to expect from one another.  She’s always tricky because she is a lefty.  You don’t play so many out there.  I already had one in this tournament, so maybe that was good practice for it.
“She has a different game than someone like Safarova.  She has a powerful game and goes for her shots, and when she’s on it’s tricky to play against her.”