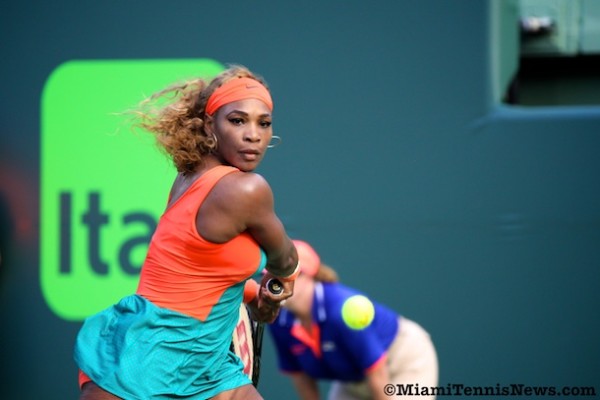 (March 25, 2014) It will be a Serena Williams versus Maria Sharapova semifinal at the Sony Open as both women defeated quarterfinal opponents in straight sets.
No. 1 Serena Williams made quick work of No. 5 seed Angelique Kerber 6-2, 6-2, winning 62% of all of the points in the match,  in the first match of the night session on Tuesday.
Williams’s match demonstrated total dominance, unlike her last two matches in which she was pushed to three sets.
“I’m playing a little better,” Williams said.  “I had to play better.  As the tournament progresses you can’t get worse, you have to get better.
“I’m happy to be doing a little better.”
The 17-time major winner still is not totally happy yet.
“The good news is I can play better, so that keeps me really happy, actually.  “So knowing that I can still play several levels higher is good for me.”
No. 4 seed Maria Sharapova came back from a break down in the first set in a rematch of the 2011 Wimbledon final to top Petra Kvitova 7-5, 6-1. She won 11 of the last 13 games.
“I started getting more chances as we played more games in the first set,” Sharapova said.
“Little by little I started seeing more opportunities and started getting myself back in the points and playing my game, playing well, going inside the baseline.
“You never are sure until you finish the match and you win the last point, but I really felt like I started doing the right things.”
Sharapova, always a bridesmaid but never a bride in Miami – she’s been a finalist five times has never won a Sony Open title.
It will be Williams against Sharapova for a place in the Key Biscayne final. Williams holds an overwhelming record against the Russian 15-2. The last time Sharapova beat Williams was back in 2004.
“Well, when you’re playing, you know, champions, you have to play your best.” Williams said.  “So she always plays her best and her heart out against me.
“We just have to bring the best because we both are really good players.”
“It’s no secret that she’s been a big challenge of mine, an opponent that obviously I would love to beat,” Sharapova said.  “There are certainly, you know, ways that I need to step up in certain situations that I haven’t been able to do in the past against her.
“But it’s great that I have come to that stage and have the opportunity to play her again.”
“I love playing her,” said the six-time Sony Open winner Williams about playing Sharapova.  “I really do.  Doesn’t matter what surface or anything.  She’s one of my favorite people to play. And so I think that helps, too, when you’re like playing people.  I think it just gets you really pumped.”
“I feel in the last few times I have played I have had my chances and opportunity and something that maybe I didn’t quite create, you know, say, a couple years ago,” Sharapova said to media.
“It’s about taking those.  Someone, an opponent that plays with so much confidence and so much power, you really need to take those few opportunities that you have.”