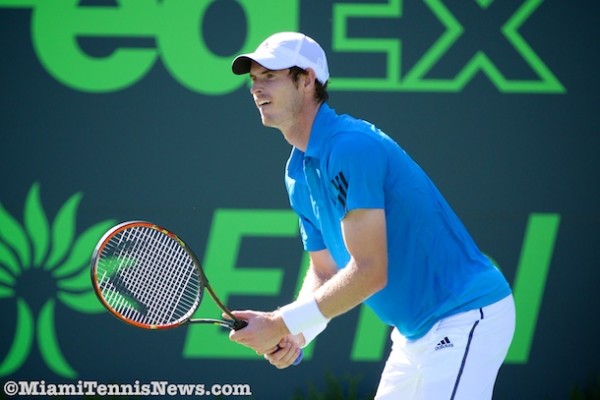 (March 25, 2014) No. 1 Rafael Nadal, No. 2 Novak Djokovic, No. 5 Roger Federer and No. 6 Andy Murray all reached the Sony Open quarterfinals on Tuesday while No. 3 Stanislas Wawrinka and No. 4 David Ferrer were upset.

Nadal had no problems dismissing Fabio Fognini 6-2, 6-2. Nadal only lost only three points during the match has dropped a total of only nine games in the three matches played so far at the Sony Open.

“First three matches I was able to find the right rhythm on court, playing aggressive, playing with no mistakes, so today was a little bit strange match,” Nadal said.

“But anyway, I think I managed well the situation.  The wind, it was hard tonight, and I was manage to do well.  So I think I played the right match.”

Novak Djokovic pushed past Tommy Robredo 6-3, 7-5. In a bit of good sportsmanship, Djokovic gave back a point which was called out, which was indeed in.

“I mean, for me, it’s something as normal,” Djokovic said about giving the point back.  “I don’t want to talk about the nice gesture that I have done.  I don’t like to talk about myself, you know.  I let everybody else to judge.

“But for me that’s something that is absolutely normal if I am not able to ‑‑ if I judge that I couldn’t win the point, that I had no chance to get that ball back in the court, or if I see the ball is good, I’m going to tell him to challenge it or that it’s very close.

Djokovic will play Andy Murray next in the quarterfinals. Murray beat Jo-Wilfried Tsonga 6-4, 6-1.

“Andy is a defending champion,” Djokovic said of a potential match-up with Murray.  “He won a couple of Grand Slams, Olympic gold medal, and obviously he’s the player who can, you know, play big‑time tennis on a big stage.”

Murray who had back surgery last year, appeared to be some pain during his win over Tsonga, despite winning easily in 73 minutes.

“My game is getting there.  I mean, the last six sets I played have been very high‑level tennis.  Again, very few errors and aggressive tennis.  You know, coming forward, taking my opportunities to hit winners, and come to the net when I had the chance.

“Yeah, I’m playing better each match, and I hope that continues.  You know, last couple of weeks have been difficult for obvious reasons.  But, you know, hopefully I’m coming out the other side of that now and keep playing better.”

Roger Federer only needed needing 49 minutes to defeat No. 9 seed Richard Gasquet 6-1, 6-2. Federer hit 25 winners during the match to Gasquet’s 8.

“I think I played well.” Federer said. “I served well.  I made my returns I had to and stayed aggressive, so I didn’t let him just make errors.  I forced him to do stuff.  It was a good match for me.”

“He had obviously a very difficult match with Ferrer, but a great one which everybody watched in the locker room and the player restaurant,” Federer said.  It was one of those thrilling end to the matches, you know, into the tiebreaker with match points saved.  It had the whole drama.

“Either one could have won, but in tennis always one guy’s got to win.  Kei did a good job getting it done at the end.  I only played him twice but practiced with him many times, so we know each other well so there are no real secrets out there.

“Clearly I think it’s an advantage at this point now that I had a quick match today and he had a really brutal match against Ferrer.  Can I take advantage of it?  Can he recover quickly?  We will see tomorrow.

“But I’m sure we will see him out on the court, and he will give it everything he has.  He always has.”

In another upset on the day, No. 22 Alexandr Dolgopolov stopped three seed Stanislas Wawrinka 6-4, 3-6, 6-1 to reach the quarterfinals.

Also advancing to the quarterfinals were Milos Raonic and Tomas Berdych who eliminated the last American man, John Isner 6-3, 7-5