You are here: Home / Contributors / Djokovic Fends Off a Strong Murray Challenge to Reach Miami Semis 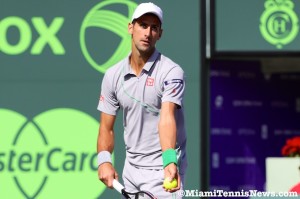 By Kevin Ware
(March 26, 2014) Wednesday’s quarterfinal match between Novak Djokovic and Andy Murray was undoubtedly going to provide a good test for both heading into the clay season. For Djokovic, it would provide a test of his newfound confidence after winning Indian Wells. For Murray, it would provide a much-needed gauge for the status of his game as well as his fitness.
In the end, Djokovic won in straight sets 7-5, 6-3. But it would be safe to say that each player got what they needed from this encounter.
Conditions were windy at the start of the match, and picked up slightly throughout the match. Djokovic initially handled the conditions best, hitting cleanly with depth from both sides. and effectively his serve. Conversely, Murray started loosely with shanks on his forehand wing and backhands into the net.
Fortunately for Murray, his stellar defense was on full display, saving him in many of the longer rallies. And any questions of fitness after his back issues in the R16 were answered as Murray sprinted from sideline to sideline in pursuit of Djokovic’s shots: with no sign of his signature grabbing at his back or legs.
The first real signs of trouble for Murray came in the fourth game. His only double fault of the first set gave Djokovic his first break point of the match. Murray fended off that break point, and then another, before winning the game with a spectacular forehand crosscourt shot that the replay showed kissed the outside of the line.
Djokovic faced his first break point of the match in the eleventh game after back-to-back double faults. The break was saved by an untimely forehand unforced error from Murray: one of his 29 unforced errors on the day. Novak held with an ace, forcing Murray to hold to force the tiebreak.
Controversy followed, however, in the twelfth game when a strong Djokovic return on the Murray serve set up an easy volley at the net. Replays on the stadium’s monitors showed Djokovic reaching over the net. Murray, who’d initially questioned the chair, saw his suspicions confirmed. He argued for the point, but to no avail.
Djokovic came to the net with Murray, and admitted reaching over to hit the volley. He wasn’t aware of any rule against doing so, and thought he’d won the point. “I thought that it’s allowed, to cross, you know, the racquet on his side without touching the net. That’s why I thought I won the point. I did not know that the rule is that I’m not allowed to cross the net.” 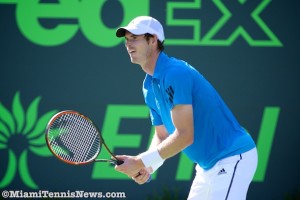 Murray, who was clearly distracted by the chair’s refusal to grant him the point, lost the next three points to lose the service game at love and with it, the set. “He (the umpire) said, yes, he was over the net, but he was in line with the net, so I didn’t understand really.”
In spite of the controversy, Murray acknowledged that it was only one game. He declined to give it any more credit than due, focusing instead on his missed chances in the second set. “I mean, it maybe had a slight bearing on that game, but I was still up a break in the second set.”
That break came in the fifth game when, in spite of two well-placed aces, Djokovic was broken for the first time in the match. Instead of making the most of this opportunity, Murray played a loose game and was broken again to level at 3-all. Novak played well enough, but Murray was hurt by two ill-timed double faults (five in total) and few more unforced errors.
After leveling the set, Djokovic wasted little time in closing out the match. He won the final three games at love, sealing the win with a forehand down the line passing shot. It wasn’t his best tennis, but Djokovic certainly forced Murray to play at the highest level from the very first point.
“I expected him to play well, to be a little bit more aggressive. I watched him play against (Jo-Wilfried) Tsonga, and he was stepping in on the second serve, coming to the net. He did that few times successfully today.”
“Winning the first set, obviously it gave me the certain kind of relief and confidence, and then in the second, even when I was broken, I felt like I still have chances and I still, you know, believe that I could win in straight sets.”
For his part, Murray was pleased about his performance. “I think my game is just about there. It’s not far off. I had many opportunities today like 30-All games and Love-30 (games) on his serve, and I didn’t serve so well when I went ahead in the second set.”
Even with the first-set controversy, there were positives Murray could take from this loss. “I would have liked to have done that better, but I was hitting the ball better from the back of the court. I was playing aggressive. I was taking the ball early. I was trying to come forward a bit. My game is not far from where I want it to be.”
Kevin Ware is in Key Biscayne covering the Sony Open for Tennis Panorama News. Follow his live updates on twitter @TennisNewsTPN.  Follow his personal twitter @SFTennisFreak.