(March 26, 2014) No. 5 Roger Federer let a set and a break lead slip and a game Kei Nishikori came back for the upset win 3-6, 7-5, 6-4 on Wednesday night to reach the semis of the Sony Open. For Japan’s Nishikori, it’s his second straight day with a victory over a top five player as he won a match against No. 4 David Ferrer on Tuesday after saving four match points. It’s his second straight win over Federer, over whom he now has a 2-1 record against.
He has also snapped Federer’s semifinal run streak at seven straight tournaments in stopping him in Wednesday’s quarterfinal.
No. 21 Nishikori has now advanced to his second ATP Masters 1000 semifinal.
In fact Federer was up a break twice in the second set but couldn’t close out the win.  Federer had his serve broken for the first time in the tournament by Nishikori who broke it four more times. Federer committed 39 unforced errors during the match versus 29 winners.
“Just couldn’t find my rhythm on the serve today, which was surprising, especially after how well I’ve played and served, especially this week, but I think it didn’t take off the way it did during the daytime,” Federer said after the match.  “You could expect that, but then plus the temperature drop had something to do with that. 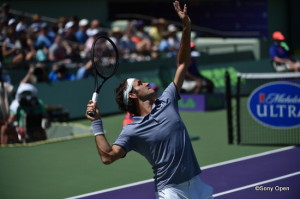 “In the dark, for some reason, I just ‑‑ you know, I haven’t played many matches this year, or maybe lately.  Only one against Tommy Haas in Indian Wells and maybe the switch didn’t work that well for me.
“But still, you know, I had the set and a break, and then another break again, so it’s a bit frustrating.  But I think Kei did well to stay with me and then, you know, not allow me to get that, you know ‑‑ that I could hold my serve and then maybe feel comfortable.
“He right away made me feel uncomfortable and stayed with me, so he was more consistent in the second and third, and those are the ones he won.  At the end it’s his credit, of course, as well.”
“Feeling good, of course, you know, to beat Roger, and it’s second time to beat him,” the 24-year-old said.  “It was different conditions.  It was, you know, tough to play on the court, both of us.
“But I thought I really played well, especially in the third.  I was hitting both deep and striking well.  Everything was going well.  You know, there was couple of tough moments, but, you know, I was fighting through and happy to win today.
“He (Federer) wasn’t making a lot of first serves today,” Nishikori explained.  “I don’t know.  Maybe because the wind.  I don’t know.
“So I was trying, you know, to step in his second serve, and my return was going well.  That was the key for the game today.”
Federer said that she sees a bright future for the Japanese player.
“I think Kei does really well controlling the ball,” said the 32-year-old. “He has great technique, especially on the backhand, very simple, very short back swings, so he does a really nice job of having good timing.
“Then the forehand can be sometimes a bit off, but I think he does a good job, you know, with his feet.  He’s a quick mover.  Same with the his serve.  I think he’s done a good job using that to his advantage now.
“I think he’s serving better this year, and I see him moving up the rankings.  Clearly, I mean, with this tournament anyway but also in the future.  I predict he’s going to be top 10 in a short while.”
Nishikori will play Novak Djokovic on Friday for a spot in Sunday’s final.
Federer will go home and prepare for Davis Cup in Geneva the weekend of April 4-6.