You are here: Home / Contributors / Williams Continues Her Domination Over Sharapova To Reach 9th Miami Final 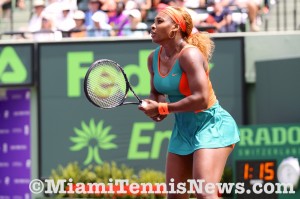 By Kevin Ware
(March 27, 2014) Serena Williams beat Maria Sharapova in straight sets 6-4, 6-3 to reach her ninth final in Key Biscayne. Williams came into this semifinal the prohibitive favorite, owing to her 15-2 head-to-head against Sharapova. But it was quickly evident that Williams’ best level hadn’t quite made it to the court by match time.
In a repeat of their 2013 final, Sharapova came out ready to play her best tennis from the very first point. She came out hitting the ball hard, deep, and into the corners. In typical fashion, she struggled with her first serve percentage, but still managed to start the match with a crucial hold.
Williams was slow to get going, and unable to take advantage of her many chances at the Sharapova second serve. She even struggled with her own potent serve at the outset, and was broken in the fourth game for a 4-1 Sharapova lead.
While this type of deficit might lead many players to panic, Williams kept her focus on the big picture. “I thought, Okay, I’m only down a break.  It was really just one break.  The scoreline looked bigger than what it was.  I felt if I could just break back, then I would be back in the match.”
Williams came back after the changeover with her “A” game ready to go. She methodically held serve for 2-4 before breaking Sharapova twice to take the first set 6-4. Her early sluggishness was replaced by big hitting, sharp angles, and untouchable serves.
The slump in Sharapova’s shoulders after Williams held at love for the set said it all. She has chances for a win if Williams is off her game, but knows that it’s going to be tough to beat Williams if she regains here form.
Sharapova was asked about Williams’s ability to take her game to another level when needed, and simply replied, “That’s why she’s No. 1 in the world.”
“There are always going to be drops. But she’s the player that is most capable of coming back from that or regaining focus and regaining that concentration as someone that’s ultimately going to do better.”
There was a glimmer of hope for Sharapova at the start of the second set when Williams took her foot off the pedal for a two-game walkabout that included lax defense, minimal footwork, and one of the worst drop shots seen at this year’s tournament. But Williams again raised her level as needed to break back for a 2-1 lead.
After Sharapova was broken at love in the seventh game of the second set for a 4-3 Williams lead, there was little chance this match might even go the distance to a third. Sharapova fought hard, but ultimately wilted under pressure. A forehand into the net handed Williams her 15th straight win over her Russian opponent.
Sharapova hasn’t beaten Williams in almost a decade, with her last victory coming at the 2004 WTA Championships in Los Angeles. And while many believe this to be one of the WTA’s big rivalries, she is quick to remind everyone that it’s not much of a rivalry until she can get a win.
When asked about their lopsided “rivalry”, Sharapova attempted to put a positive spin on the situation. “I mean, despite my results against her, I still look forward to playing against her because you learn so much from that type of level which she produces.”
“You finish the match, and you know where you need to improve and the things that you need to work on.”
In spite of her win, Williams remained subdued in the press room afterward, fending off questions of rivalries and potential challengers. She takes no one for granted, and views every opponent as a potential rival.
“I mean, everyone I play always plays me hard, so I feel like every match I play I literally have to be on my best, so for me I take a rival as every match, and I think that’s one of the best ways to take it.”
“You have to show up, and if you don’t show up, then your biggest threat will be yourself.”
Williams has won the title in Miami a record six times, one more than Steffi Graf. A seventh title would give her the record for the most Miami titles of all, surpassing the great Andre Agassi.
Williams will face Li Na in Saturday’s final after her late-night three-set win over Dominika Cibulkova.
Kevin Ware is in Key Biscayne covering the Sony Open for Tennis Panorama News. Follow his live updates on twitter @TennisNewsTPN.  Follow his personal twitter @SFTennisFreak.