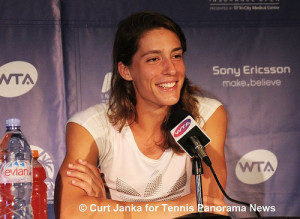 (April 6, 2014) In a week full of surprises in Charleston, 14th seed Andrea Petkovic won the Family Circle Cup for her first WTA Premier level tournament title with a 7-5, 6-2 win over Jana Cepelova of Slovakia on Sunday. This is her third WTA tournament crown, first in three years since she won the Strasbourg title in 2011.
Petkkovic knocked out three top ten seeds on the road to the title – No. 4 Sabine Lisicki, No. 9 Lucie Safarova and No. 6 Eugenie Bouchard.
The German who was once No. 9 in the world before being beset by injuries, is currently at No. 40 in the world will move into the top thirty with the victory.
No. 78 Cepelova beat No. 1 Serena Williams in the second round of the tournament. She’ll see her ranking rise into the top 50 for the first time.
At the end of the match Petkovic dropped on the ground in celebrations before she came to the net and hugged her opponent.
“I don’t know why but I just sort of broke down,” Petkovic said. “I was happy. Normally I don’t cry when I’m sad – I cry when I’m happy, strangely, so it’s weird, but I don’t know. I was just so relieved and proud that I’ve come back from all these injuries, and I never thought I would play in the finals of the big tournaments again, and so I was just proud and happy and everything just sort of came together.”
Petkovic takes home $120,000 for the win.