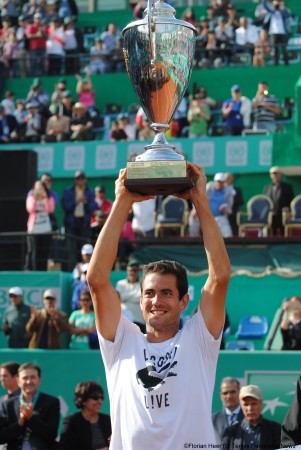 By Florian Heer
(April 13, 2014) CASABLANCA – Before the final had started on Sunday, it was clear that a new Grand Prix Hassan II champion will be crowned in Casablanca when the all-Spanish-affair took place between first-time finalists Marcel Granollers and Guillermo Garcia-López. It was the second time in three years that two Spaniards have faced off in the final here, after Pablo Andújar defeated Albert Ramos in 2012. The last meeting between the two players also took place in Casablanca back in 2010 with the better outcome for Garcia-López winning in straight sets.
In Sunday’s encounter, it was the 27-year-old from Barcelona having the better start. In front of an almost fully packed Centre Court, Granollers broke in the 11th game of the opening set to take it after 66 minutes.
In the second set, the quality of the match improved and the often noisy crowd heated up the atmosphere under the Moroccan sun. Garcia-Lópzez, who lost his focus due to some unsettled spectators for only a short time, gained the decisive break in the tenth game to take the match the distance.
The 30-year-old also had the better start into the final set, capitalized on his first break point opportunity and just played more consistent than his opponent. Garcia-López served the match out in the ninth game winning 7-5, 4-6, 6-3 to capture his third ATP career title after two hours and 38 minutes.
“Of course I’m very happy today,” the winner stated afterwards. “I know Marcel very well. We practice together a lot of times, so we have known each other’s games for a long time. The match was very close all the time. We also had to face a couple of interruptions by the crowd, so the match was also very long and not easy to play for us,” Garcia-López said. “To play aggressively and concentrated was the key to success today. I will gain confidence from this win, as last year I played two finals and wasn’t able to seal victory. Today was a big step for me,” the Spaniard concluded.
His fellow countryman was understandably disappointed. “I think it was a tough match for both of us,” Granollers said. “I played solid until the middle of the second set, but then I had a couple of bad games. Guillermo, however, played a good match and he deserved to win,” Granollers said accepting defeat.
Florian Heer travels the tennis tour with a focus on ATP Challenger events and the ITF Future Circuit!  Follow his twitter account @Florian _Heer.