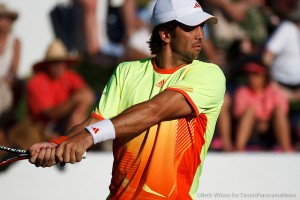 (April 13, 2014) Spain’s Fernando Verdasco ended a four-year streak without a singles title on Sunday by winning the U.S. Men’s Clay Court Championship in Houston over countryman Nicolas Almagro 6-3, 7-6(4). Verdasco if the fifth ATP player over 30 to capture an event this year. His last tournament win was back in 2010 in Barcelona.
“It’s been a long time since I’ve won a singles title,” Verdasco said. It’s a very important day for me to win a tournament after a few years and after the injury in my knee the last couple years.”
“I’ve been happy the way I’ve been feeling the whole week. In general, I think I had ups and downs, but it’s normal. In tough matches on clay you are not always 100 per cent every point physically, and you just need to try to be tough mentally.
“I think the key was my mentality during the week. I kept going every point no matter how tired or how good I was feeling. Didn’t finish perfect since we lost yesterday in the doubles final when we were close to winning, but it was great that I’m able to win the singles title.”
“He played a really good match today, and he’s the winner,” Almagro said. “It was a battle today, and he was really concentrated on his serve. I had many chances and I didn’t [take them], and that’s the key of the match.”
Almagro was the losing finalist last year as well, falling to John Isner.
“You are never happy when you lose a final,” he said. “I had my chances. But I credit Fernando.”