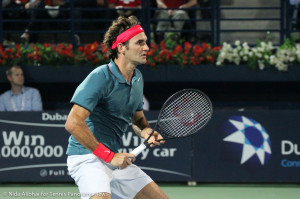 (April 19, 2014) It will be an all-Swiss battle for the Monte Carlo Rolex Masters crown on Sunday as Roger Federer beat an injured defending champion Novak Djokovic and Stanislas Wawrinka stopped David Ferrer to set up the final.
Federer who came in as a wild card defeated Djokovic 7-5, 6-2. Djokovic was dealing with a wrist injury since the beginning of the tournament and it was heavily bandaged for his match on Saturday. The world No. 2 Djokovic was toe-to-toe with Federer until the end of the first set, after that Djokovic appeared to be in pain.
Wawrinka dominated David Ferrer in first set and held steady at the end of the second set for a 6-1, 7-6(3). Ferrer played an aggressive game hitting 31 winners past Ferrer.
Sunday’s final will be the first all-Swiss final since 2000 when Marc Rosset beat Federer in Marseille. It will be No. 3 Wawrinka versus No. 4 Federer as the pair meet in a final for the first time. Federer leads their head-to-head 13-1 overall, with his only loss coming in Monte Carlo in 2009.
Wawrinka hopes to win his first Masters Series title and third title overall for 2014. Federer is looking for his first title in Monte Carlo, he lost three straight finals to Rafael Nadal from 2006-2008.