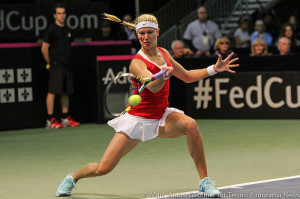 By Charles David Mathieu-Poulin
(April 20, 2014) QUEBEC CITY – It wasn’t as easy as the final score looks to be, but Canada managed to sweep the first three singles rubbers in order to defeat higher ranked Slovak Republic On Sunday in the Fed Cup World Group playoff in Quebec City, Canada. After the two long three set battles of Saturday went Canada’s way, Eugenie Bouchard finished things off against Jana Cepelova not without saving a set point in the first set.
Indeed, it was Cepelova who was playing the best tennis early on, getting numerous break points in the first three Bouchard service games. While she wasn’t able to convert on her first five tries, she did do so on her sixth, getting a 5-3 lead with the first break of the set. But for the fourth time of this tie, she then failed to serve for a set, getting broken at love. It didn’t stop her from getting a set point in the next service game, but the Canadian erased it with a clear forehand winner. While both players held to force a tiebreak, it was then Bouchard who drew first blood, taking a quick 4-1 lead, then a 6-4 lead with an ace. But it was then her time to falter, as she double faulted on her first set point, then missed on the second. Somehow, she did manage to win the next two points and, once again, Canada came out on top of a set they probably shouldn’t have won.
The loss of this close first set seemed to affect Cepelova mentally, but also physically, as she seemed to get stiff in the neck area and was constantly rolling her shoulders to release tension. Her serve, which isn’t her biggest weapon to start with, suffered from it and became easy attackable for Bouchard, who then went on to win five straight games and what seemed like an insurmountable lead.  One game way from an historic win, Bouchard did start missing a touch more, while Cepelova started giving a last effort in order to get back. It did work, and after the Slovak won her serve for 5-1, then broke and held again, Genie saw her lead melt off to only one break. The crowd, which was getting quite excited at the prospect of a quick second set, started getting worried when Bouchard got down 15-30 in that 5-3 game. But strong serving and a few misses from Cepelova helped Genie sweep through the last three points, and send Canada into the World Group in 2015.
There was a lot of attention on Bouchard this weekend, as she has been rising up the ranks and is becoming quite the celebrity in her home country. But there was a small glitch in her armor, as she ruffled a lot of feathers with her Handshake-Gate on Friday at the draw ceremony. Indeed, she then refused to shake her opponent’s hand in front of the cameras, describing the photo-op as ‘’lame’’. Whether or not it affected her on court is tough to say, but her performance all weekend, and her overall body language throughout both matches, were off.
But Bouchard’s strong self-confidence is well-known, and she proved it again during this tie. Despite having issues finding her range with her groundstrokes and spirited opponents, she managed to raise her level when she needed to, a sign of greater things to come. She saved set points in both first sets of her matches, then closed them out in tiebreaks, and found ways to reel off series of games to close out the matches. Champions step it up on important points, and she proved again that she might be becoming one quicker than expected.
This win was remarkable from Canada, as they had been struggling to get out of the America Zone in the past years. Before this weekend, they had not reached the World Group since 1994, when the top 16 countries were present; it is therefore their first trip into the Elite 8. They have defeated Ukraine, Serbia and the Slovak Republic in the past 12 months, three countries with better Fed Cup résumés and will now be waiting to see who their first round opponent will be in 2015 out of Germany, the Czech Republic, Australia, Italy, Poland, Russia and France.
On a side note, the doubles match, a dead rubber, saw Slovakian team of Schmiedlova/Husarova beat Canadians Fichman/Dabrowski 6-4 5-7 11-9, leading to a final score of 3-1 for Canada.