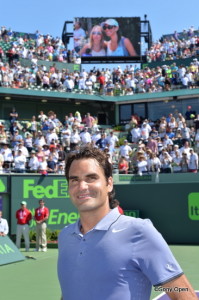 (May 13, 204) Last week Roger Federer became the father of a second set of twins, when wife Mirka gave birth to sons Leo and Lenny. Federer withdrew from the Madrid Open last week to be with his family during the birth and is back on tour this week playing the Italian Open.
“I spoke to the team, I spoke to Mirka, asked all of them what they think I should do and they told me to come here and play,” said Federer in his pre-tournament news conference in Rome. “So I said ok, if you don’t want me around, I’ll go away! I miss them a lot already, it’s a different type of week, but I’ll get through it and I hope I can play some good tennis here.”
“I couldn’t be happier… for those who have kids it’s the best thing… they know what I am talking about. It’s hard to leave all the family, but I’ll see them soon, shortly. The boys are healthy and Mirka is good too. It’s a great time in our lives.
“The plan is that they can come on tour. At least we know how to handle with kids on the road, and that’s quite a challenge early on especially when they are about 12 months old.”
“Things went well, the boys are healthy. Mirka’s good, too,” the world No. 4 said. “So it’s a great time in our lives right now.”
“Boys names are hard. It was all last minute,” Federer said. “Girls, I feel like there’s so many nice names and they’re all cute but with boys it’s totally a different story.
“I miss them a lot already and also the girls. It’s a different type of week but I’ll get through it and I hope I can still play some good tennis.”
Leo and Lenny join twin sisters Myla Rose and Charlene Riva in the family. The girls will turn 5 on July 23rd.
“This time around, we kind of know how to handle kids on the road,” the Swiss said. “I’m aware it’s going to be a lot of work but at the same time I know what I’m getting into. So it’s something I’m very much looking forward to. … There will be a long time without any traveling after the tennis is over, so I’m looking forward to the next couple of years now.”
“Papa” Federer is a three-time losing finalist in Rome – 2003, 2006 and 2013. He’ll begin his quest for a Rome title on Wednesday when he plays Jeremy Chardy.

Federers Welcome Another Set of Twins to the Family