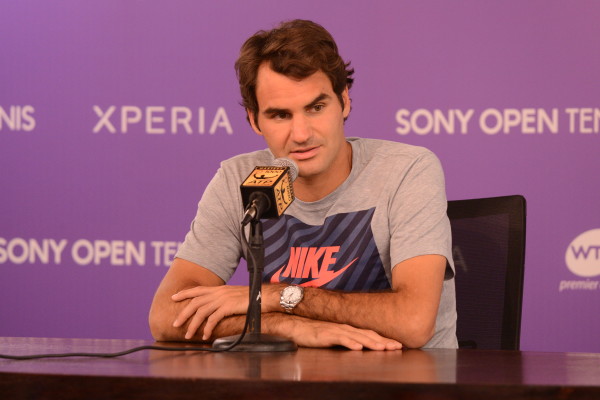 (May 14, 2014) It’s back to paternity leave for Roger Federer who fell to No. 47 Jeremy Chardy in his opening match at the Italian Open 1-6, 6-3, 7-6. Federer lost despite holding a match point on her own serve in the third set tiebreak.
The 32-year-old Federer was playing his first match since his wife, Mirka, gave birth to their second set of twins, Lenny and Leo, last Tuesday.
No. 4 Federer came back from a 2-4 down in the final set to force a tiebreak and had a match point at 6-5 after Chardy double faulted. Chardy hit a stunning forehand passing shot at 6-6 and took the match on the next point when Federer hit a forehand long.
“I think we both struggled to win today and at the end a shot here or there may have decided the match,” Federer said to reporters in Rome. “He gave me a double fault to give me match point. I missed my first serve, which was crucial, but credit to him to give it a go. A passing shot is a tough one for me to take. Credit to him for fighting his way back into the match.”
For the 27-year-old Frenchman, he beat his first Top 10 player of 2014 and the eighth of his career.
“This one is totally OK if it doesn’t hurt,” Federer said of the shocking loss “I tried everything. I can’t do more than that on the court.”
“I still feel good, my body is good, my mind is good and it’s just unfortunate for one passing shot today I don’t get another opportunity to play this week.”