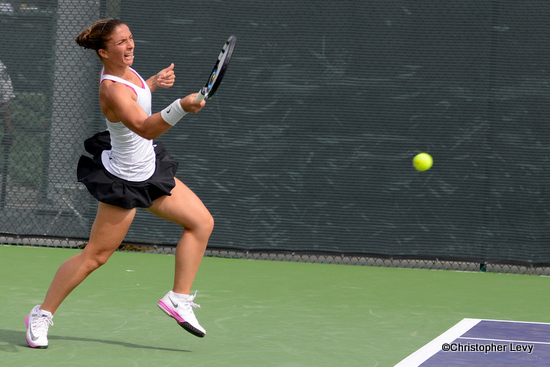 (May 15, 2014) Italy’s Sara Errani conquered Rome on Friday when she upset No. 2 Li Na Na 6-3, 4-6, 6-2 to reach her second straight Italian Open semifinal, much to the delight of a supportive crowd. Coming into the match Errani was 0-6 versus Li.
The No. 10 seed is trying to become the first Italian woman since Raffaella Reggi in 1984 to win Rome.
Li committed 52 unforced errors to Errani’s 21. In her post-match news conference, Li said that she threw up before the match. She told press that her illness could have been caused by pasta or allergies.
Errani will face either Jelena Jankovic or third-seeded Agnieszka Radwanska in the semifinals.