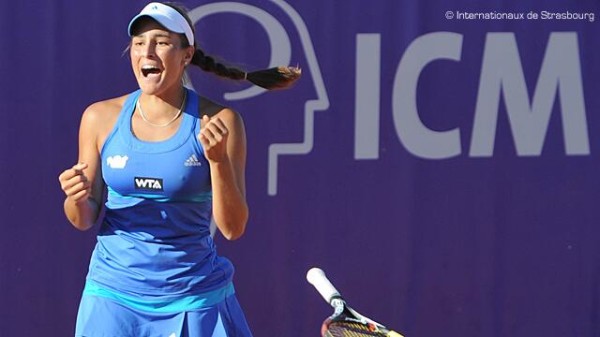 (May 24, 2014) Twenty-year-old Monica Puig became the first Puerto Rican player to win a WTA title on Saturday when she defeated Spain’s Silvia Soler-Espinosa 6-4, 6-3 for the Strasbourg International title.
Before this week, Puig had not been beyond a WTA quarterfinal and did not drop a set to win her first WTA title. She’s the tournament’s first unseeded winner since Aravane Rezai in 2009.
“I woke up this morning and I felt it,” Puig said. “I felt I was going to do something amazing. It was one of those feelings where you just know it’s going to happen, and I played some of the greatest tennis I’ve ever played. I was very focused and very poised on the court, and I’m very happy how things went. I just went on the court and felt it was my moment. I just had to go there and take it.”
“Monica played really good tennis,” Soler-Espinosa. She played really aggressive and served really well. It was tough for me to compete against her.”
“It’s amazing to do this coming from such a small island, where tennis isn’t necessarily recognized as one of the main sports,” Puig continued. “I’m just happy I’m able to be here playing tennis not only for myself, but for my country too.”
Puig will head to the French Open where she’ll play 2010 finalist Sam Stosur in the first round.