You are here: Home / Front Page News / "Chatrier-gate" and Rain-Delay Chats in Notes and Quotes for Day 2 of the French Open 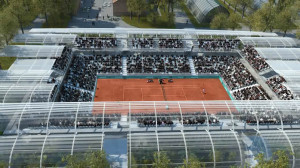 There was an uproar by many in the tennis world when on Sunday, it was announced that Rafael Nadal the 4-time defending champion and 8-time French Open winner was assigned to the second show court Suzanne Lenglen and not the primary show court Philippe Chatrier.

When asked about this after he won his first round match on Monday, Nadal said:

“Doesn’t really matter a lot.  Always playing Roland Garros is a pleasure for me, is a really honor, and is a special feeling.  So all the memories at this place give me are unforgettable. And doesn’t matter if it’s Chatrier or Lenglen or another court, be around here in Roland Garros always gonna be great.  And I started in Lenglen this year, is a great court. I am not sure, but probably next one I gonna play in Chatrier.  That’s it.”

In the second rain delay of the Novak Djokovic match in the second set, Djokovic went into showman mode by making funny faces at the TV camera and inviting a ball boy who was holding his umbrella to sit beside him on the bench to chat. Djokovic let the ball boy hold his racquet and gave him a bottle of Perrier water, while the Serb had a sports drink. A few minutes later the rain delay ended and they shook hands hands to end their chat.
“We had a nice chat,” Djokovic said. He’s a tennis player, so I asked him how long he’s playing, and how he’s enjoying his time as a ball kid. It was a nice, fun time, something unusual for the Grand Slams.”

Q.  This is not strictly related to Roland Garros, but how would you describe your relationship with your racquet?
RAFAEL NADAL:  With my racquet?
Q.  Yes.  How do you feel with it?  And what does it represent with you?
RAFAEL NADAL:  I know my racquet since a long time (smiling).  No, that’s the best thing that I can say about my racquet is for some reason I am playing with this one.
It’s because I feel the racquet give me what I need for my game and is long, long time ago that I am playing with Babolat, since the age of 10 or 11, I don’t remember.  Always Babolat did the best possible for me, trying to help me in what I really need.
I think is great to be part of a great company of Babolat and a great company in the world of tennis.  I have a great relationship with them, and that makes the things a little bit easier.

Journalist Cogratulates player when he lost

Seems a reporter was misinformed about whether Nicolas Mahut won or lost his match at the French Open on Monday just before Mahut’s post-match news conference.

Here is the first portion of the official transcript: 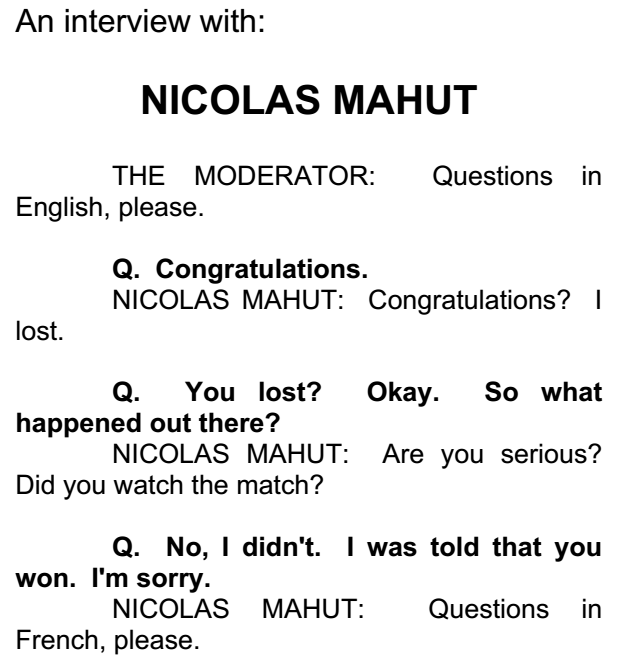