You are here: Home / Features / Li Na Ousted in First Round of French Open 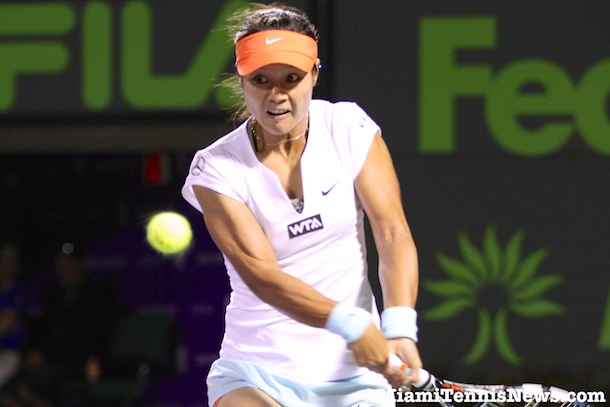 (May 27, 2014) In less than 24 hours both reigning Australian Open singles champions find themselves victims of first round losses at the French Open. On Monday it was Stan Wawrinka, on Tuesday No. 2 Li Na fell to French woman Kristina Mladenovic 7-5, 3-6, 6-1.
It is the first time in history that both the men’s and women’s Grand Slam singles champions have lost in the first round of the next major.
Li, the 2011 Roland Garros champion had an error-filled match, 37 unforced miscues in all.
“In my mind I didn’t have any idea how to play the match,” Li told media.
“Nobody says if you’re No. 2 in the world you win all the matches. That’s tennis.”
“I don’t think it is only the bad day,” Li continued. “I think it’s probably about me. Of course the easy thing is to say today was a bad day for me, but it’s not. I’m 100% sure. The problem is me. I don’t think I’m doing well on the court. And also, even during the match, I wasn’t thinking through what I should do, especially, I didn’t follow the game plan, and even when I was standing out on the court, in my mind I didn’t have any idea how to play the match.”
For the 21-year-old Mladenovic, who won the Roland Garros Junior championship in 2009 and is currently ranked 10 in the world, this is the biggest win of her career.
Also early on Tuesday an upset on the men’s side, 11th seen Grigor Dimitrov lost to big-serving Ivo Karlovic 6-4, 7-5, 7-6 (4). Dimitrov reached the third round to Paris last year.
“Today he was all over the court,” Dimitrov said in press. “He was just hitting his shots, you know, penetrating every volley, low slice, serving really good.”