You are here: Home / Features / Serena and Venus Williams Upset at French Open 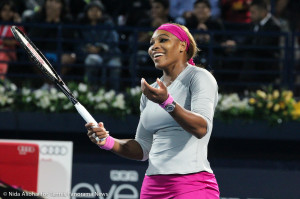 (May 28, 2014) For the first time since Wimbledon 2011, Serena and Venus Williams have been beaten in a major on the same day. At Roland Garros on Wednesday in the second round, defending champion Serena Williams was upset by world No. 35 Garbine Muguruza from Spain 6-2, 6-2, while 29th seed Venus Williams fell to Anna Schmiedlova of Slovakia 2-6, 6-3, 6-4.
Serena’s 64 minute loss marks her worst defeat at a major, winning only four games total. It’s also only the third time the 17-time major champion has lost before the third round of a major.
Coming into Paris, Muguruza, never had a top 5 win.
“It was one of those days. You can’t be on every day, and, gosh, I hate to be off during a Grand Slam,” Serena told media. “It happens, you know. It’s not the end of the world. It is what it is.”
#494137647 / gettyimages.com

“I was focused,” Muguruza said. “I knew what I had to do.”
“I have actually never seen her play like this,” Williams said. “Hopefully she can keep it up.”
“I haven’t gotten past the fourth round of a Grand Slam this year,” Serena continued. “I have a couple words to describe it, but I think that would be really inappropriate so I’m going to leave it at that.”


Venus Williams let a set and a break lead slip to the 19-year-old Schmiedlova. This is the eighth time in her last nine major tournaments played that sthe 29th seed has not won more than one match.

Had both sisters won, they would have been facing each other in the third round.
With second seed Li Na’s elimination on Tuesday, it marks the first time in the Open Era of tennis that the top two women’s seeds have been eliminated before the third round.

Congrats 2 my opponent today. She did her thing. I’m proud of her. I wish her well. Until next time. There’s always tomm & I will be ready. — Serena Williams (@serenawilliams) May 28, 2014