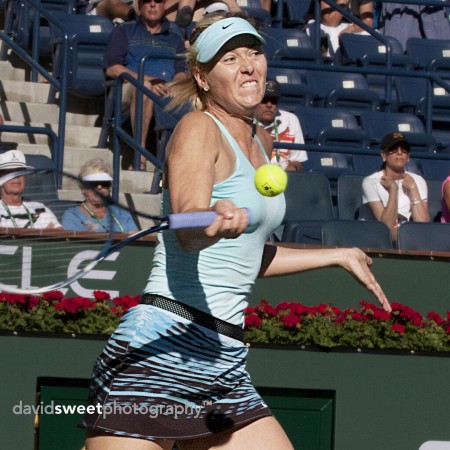 (June 5, 2014) Maria Sharapova is into her third straight French Open final, defeating young Canadian Eugenie Bouchard 4-6, 7-5, 6-2 on Thursday in Paris.
Sharapova, the seventh seed dropped the first set in her third straight match in Paris now owns a 8-4 record in majors when she loses the first set. The Russian is on a 19-match win streak in three set matches.
Sharapova won the French Open in 2012 and lost in last year’s final to Serena Williams.
The 18th seed Bouchard who will move to No. 12 when the new rankings come out next week. Bouchard is the only player this year to reach the semifinals of both the Australian and French Opens..
“I think it was a tough battle, which is what I expected, Bouchard said in press.  I mean, I felt the whole match I didn’t play as well as I have played earlier in the tournament.
“You know, it’s always disappointing to be a little bit off.  I felt like I was trying to do what I wanted to do, which was be aggressive, go for my shots.  But often I constructed the point well and then didn’t finish it as well as I could.”
“It’s not how you finish a first set, it’s how you finish the last set,” Sharapova said.

“I didn’t feel that I was playing my best,” Sharapova said. “I fought, I scrambled, and I found a way to win.”
Sharapova will play fourth seed Simona Halep of Romania who defeated 28th-seed Andrea Petkovic of Germany 6-2, 7-5(5).
“I played really well here, a few good matches,” Halep said. “But next round will be very tough. I know Maria. She’s a great champion.”
Sharapova has never lost to Halep, she’s 3-0.
By reaching the final, Sharapova will be ranked No. 6 next week and Halep will move up to No. 3.