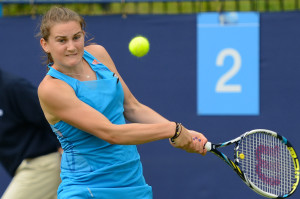 (June 8, 2014) LTA – British teenager Katy Dunne earned herself a place in the main draw of a WTA tournament for the first time when she won her final qualifying match at the Aegon Classic on Sunday.

Dunne,19, stunned the far more experienced Timea Babos (who was seeded second in qualifying) 6-2, 7-6(4), to follow on Saturday’s giant-killing win over Alize Lim. Dunne, who is from Hemel Hempstead, was granted a wildcard into qualifying in Birmingham and has made the most of her chance. Her victories so far at the Priory Club should see her break into the world’s top 400 for the first time.
“I’ve definitely taken the opportunity because I’ve just qualified and I’m pretty chuffed at the moment,” said Dunne after beating Babos.”I thought I could win one round (so) I just thought go out there, try my best and see what happens and obviously I won and that gave me a bit of confidence that I carried through.
“It’s great to play in front of a home crowd. Obviously I’m used to smaller tournaments with no-one watching so this is amazing. Now I’m just going to let this sink in first and go out swinging for the first round in the main draw because I have nothing to lose”.
Two-time Wimbledon quarter-finalist Tamira Paszek, who is also a former champion of the Aegon International in Eastbourne, was also amongst the other qualifiers on Sunday.
Monday sees main draw matches get underway in Birmingham, with teenagers Donna Vekic and Belinda Bencic opening the tournament by playing the first match on the Ann Jones Centre Court.
AEGON CLASSIC
Birmingham, England
June 9-15, 2014
$710,000/Premier
Grass/Outdoors
Order Of Play – Monday, June 9, 2014
Ann Jones Centre Court (from 11.00hrs)
1. Donna Vekic vs. Belinda Bencic
2. Zheng Jie vs. Francesca Schiavone
3. Mona Barthel vs. Ajla Tomljanovic
4. Kristina Mladenovic vs. Shahar Peer
Court 1 (from 11.00hrs)
1. Virginie Razzano vs. Karolina Pliskova
2. Paula Ormaechea vs. Kimiko Date-Krumm
3. Lyudmyla Kichenok vs. Alison Riske
4. Teliana Pereira vs. Madison Keys
Court 2 (from 11.00hrs)
1. Bojana Jovanovski vs. Yanina Wickmayer
2. Tamira Paszek vs. Lauren Davis
3. Victoria Duval vs. Caroline Garcia
4. Zhang Shuai vs. Eleni Daniilidou
Court 3 (from 11.00hrs)
1. Alison Van Uytvanck vs. Varvara Lepchenko
2. Coco Vandeweghe vs. Zarina Diyas
3. Sharon Fichman vs. Nadiia Kichenok
4. Camila Giorgi vs. Katy Dunne