You are here: Home / Contributors / Stephens and Ivanovic Advance, Stosur Beaten in Birmingham 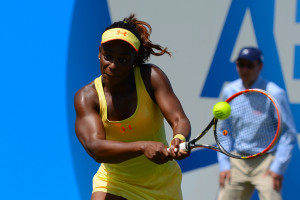 (June 12, 2014) BIRMINGHAM – It is a rare thing to have two days of sunshine, but prize of the day already (and we’re still only in the early stages of the matches on the slate for today) was Sloane Stephens who educated the waiting press on NCIS marathons that were keeping her from sleeping, and her opinion on the English football team and their penalty taking skills.

Stephens is enjoying a purple patch off a decent run on the dirt in Roland Garros, and the perhaps inevitable question of “When will we see you in a final” is more relevant here – she is playing pretty solidly and could well wind up in a semi-final at least with top seed Ana Ivanovic.

The smiling Serbian was, as always, upbeat about her time on the green stuff. He play today was pleasingly aggressive and she showed some great deftness with volleys as she pushed past Lauren Davis.

After the match she said: “I just felt the ball really good. I timed it well. I knew she’s a player who stays low in the grass and it can work well sometimes, so I really tried to stretch her and come forward. I did that well. I served pretty well. I got her out wide a lot and came in, hit some good volleys, which I was happy. And my coach, too.”

One seed who will not be in the lineup is Sam Stosur who came out on the wrong side of an all-Australian encounter after losing to Casey Dellacqua in three sets. She has never been able to get a win over her compatriot, even though the last time they met was 2003.

By and large the crowds have been good in this fair city, and the weather has been kind, but grass has been unforgiving, and it does not take long for the surface to scupper the hopes of even the most accomplished (Just ask Serena Williams!).

The highlights for Friday will be to see if Stephens can edge ever closer to a final, but Ivanovic is looking serene.